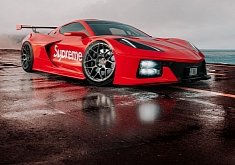 10 Sep 2022, 18:59 UTC / Sony Pictures CEO Tony Vinciquerra talks about his passion for cars but also shares a publicly unknown aspect about him and the famous Carroll Shelby

Abandoned Tesla Model 3 in Ukraine Gets Bashed on Twitter But Is That Correct?

21 Mar 2022, 13:45 UTC / The tweet author claims that there is no way to get electricity when the grid is down, while gasoline or diesel is always around. Those are false premises

This Concept Car Could Have Been a Treasure for GM, But the Production Model Came Too Late

24 Nov 2021, 12:23 UTC / Sorry, GM, your car was far too advanced for its time when it was unveiled as a concept, and came too late on the market to save your European branch

5 Apr 2020, 20:22 UTC / Since installing an aftermarket unit in Gen 1 Chevy Volt isn’t really the easiest thing to do, someone has actually managed to enable CarPlay on the stock unit

19 Dec 2019, 18:13 UTC / If you own an OnStar-equipped GM product or any other modern vehicle with 4G LTE connectivity, then you should be also aware that automakers are tracking you

16 Oct 2017, 11:26 UTC / With Pamela Fletcher as the vice president of global electric vehicle programs, General Motors will launch more than 20 EVs by 2023 on a global level

23 Nov 2016, 09:21 UTC / Morrissey has written an open letter to Mary Barra, which asked GM's CEO on behalf of PETA to offer a Vegan leather option for the Chevrolet Bolt and Volt

18 Nov 2016, 17:42 UTC / As we wait for GM-SAIC to finish development on the Chevrolet Volt's Chinese counterpart, Buick is teasing us with the plug-in hybrid Velite Concept

Chevrolet Sold 100,000 Units of the Volt In the United States

1 Aug 2016, 16:58 UTC / Volt owners now have yet another reason to celebrate their purchase! Combined, both generations of the Volt have sold 100,000 units in the United States alone

21 Jun 2016, 14:02 UTC / GM has set up a team of hundreds of people at its autonomous vehicle research facility in Warren. A test track has been built, and more employees are wanted

GM Considers Selling the Volt's Powertrain to Other Brands

9 Feb 2016, 10:47 UTC / General Motors is considering the possibility of licensing the Voltec powetrain of the 2016 Chevrolet Volt. No potential partners have been mentioned