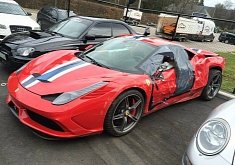 11 Jun 2015, 09:58 UTC · By: Florin Tibu / James Hillier takes the Kawasaki Ninja H2R for a parade lap around the Moutain Course, and it looks like it went past the Sulby Straight doing around 207 mph.

Blood Is Thicker than Water: Michael Dunlop Halts Practice to Carry His Injured Brother on a Stretcher

10 Jun 2015, 08:06 UTC · By: Florin Tibu / Michael Dunlop stops his practice lap at the Isle of Man TT to see to his injured brother William and helps the marshals carry him on a stretcher

28 May 2015, 10:24 UTC · By: Florin Tibu / Apparently, Victory reduced the peak power output of the Brammo Empulse RR platform for the bike that will soon take part in the Zero TT at the Isle of Man

12 May 2015, 14:33 UTC · By: Florin Tibu / It's a glorious day for Victory as the American manufacturer announces the maiden presence in an European road racing event debuting an electric motorcycle