1 Zeva's Flying Saucer Is Back, This Time With Video Proof That It Can Stay in the Air

3 There's a New eVTOL in Town. It's Called a Volar and It Nailed Its Test Flight in Dubai

When we said that eVTOLs (electric vertical take-off and landing) are being developed all over the world, we meant it. Now it’s time for a startup based in Prague, the Czech Republic, to officially introduce its new-generation hybrid VTOL, which aims to become a game-changer in regional air mobility due to its extended range.
7 photos

Like most startups, Zuri was also born from an apparently-simple idea. Its founder, Michal Illich, drew the first sketch of the future electric aircraft using crayons he borrowed from his kids. Since 2017, when it was launched, his urban air mobility company has advanced quickly, going from initial designs to several flight tests and culminating with the recent unveiling of the Zuri 2.0.

One of the downfalls of most eVTOLs is their limited range, invariably depending upon current battery technology levels. This is why the Czech company focused on ways of enabling a longer range. Its flagship aircraft, equipped with a hybrid powertrain, claims to offer a range of more than 435 miles (700 km) and a cruising speed of over 186 mph (300 kph) while also being nearly silent and able to land in tight spaces.

The manufacturer introduced a passenger version, with four to five seats, and a cargo version. Both feature four propellers in the front and four in the back, plus several independent battery boxes, each monitored by a smart battery system.

In terms of technology, the Zuri aircraft claims to have a sophisticated autopilot using data from multiple inputs, including traffic and terrain, for a safe flight. In addition to the fly-by-wire system with a “mechanical backup for airplane control surfaces,” the VTOL is also equipped with sensors and AI algorithms for computerized vision and object recognition.

Towards the end of 2021, the Czech hybrid VTOL successfully completed its first hover test, a culmination of previous test flights. Both the passenger and cargo versions of Zuri 2.0 are gearing up to take regional air mobility to the next level very soon. 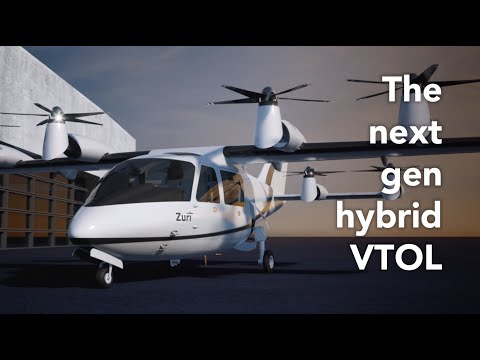