2 Harley-Davidson “Goldeneye” Bets on Golden Wheels, Not Sure It Loses

Daniel Patrascu
If there is one project the American defense industry screwed up in modern times, then that’s the Zumwalt-class destroyer program. Born in the minds of naval engineers in the early 2000s, the family was supposed to become a fleet of over 30 ships, with stealth attributes (hence their strange shape) and multi-mission capabilities.
6 photos

The incredible high cost of development, along with some procurement blunders made the Navy ask in 2008 for the program to be canceled, and development to be focused on more Arleigh Burke-class destroyers.

It meant that from over 30, production target dropped to just three, none of which were fully operational at the time of writing. Yet, given how thus far the cost per ship, including research and development, has reached $7.5 billion, the Navy is not really willing to give up on the three. So it decided to spend some more.

As a result, defense contractor Raytheon Missiles & Defense, which already is a solid contributor to the Zumwalt, announced this week it is at the receiving end of a $483 million “activation, sustainment, and modernization contract,” with the chance of it growing to $1.68 billion over the next five years, if all options are exercised.

As per the company, the work being conducted on the three ships will include “design, integration, test and evaluation, system upgrade and replacement, logistics product development, configuration management, and training systems.”

The goal of all this work is to complete the activation and introduction of the Zumwalts. The ships only received initial operational capability at the end of last year, and inaugural fleet employment is expected for later in 2022.

Once operational, the Zumwalt is expected to be one of the most modern ships out there. It will use a high degree of automation for its computing applications, reducing the need for manpower, two sonar arrays for underwater warfare, a missile launcher, and two 155 mm guns capable of hitting targets 72 miles (116 km) away. 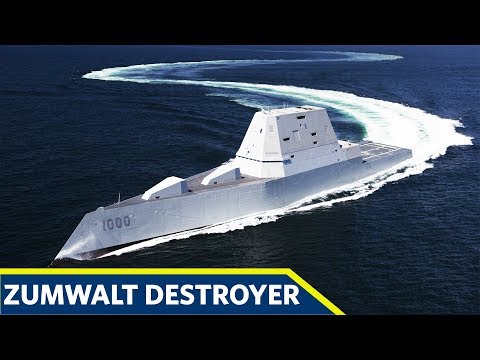