3 Zenvo ST1 Supercar Shows Up in Geneva with New Transmission

5 Zenvo ST1 to Make European Debut in Geneva
Car video reviews:
Up Next

Meet the Zenvo TSR-S. No, wait... you've already met it at the Geneva Motor Show in March and again a couple of days ago in that huge supercar parade. But this track action has everybody in awe because it shows the cool moving rear wing that it possesses.
1 photo
Active aero is pretty common nowadays. The most common are shuttlers in the grille, you see on the Ford Focus and most BMWs. Then there's slightly fancier stuff, like a pop-up rear wing, followed by powerful hydraulically activated air brakes.

But the new Zenvo hypercar makes even a Bugatti Chiron seem dull with its massive rear wing which pivots from side to side to change the cornering characteristics of the car. It's a bit like seeing a sailing yacht trying to catch the best winds.

The so-called Centripetal Wing uses two rotational axes to act both as an air brake and stabilizer. It works in the opposite direction to steering input, generating extra downforce.

Of course, we have no way of knowing if it's necessary. But one thing is for sure. Even though supercar owners brought about $40 million to the track that day, they were probably all looking at the Zenvo.

“The TSR-S wing concept is able to maintain the high downforce and generate a large inwards directed force,” says Kasper Damkjær, the senior fluid mechanics specialist, involved with the development of the fancy TSR-S aerodynamics. “When the wing is tilted, downforce is only decreased by 3%, while an inward directed force of 30% of the wing downforce is generated.”

And you probably need all the help you can get when your 5.8-liter engine uses two superchargers to develop 1,200 horsepower. The 0 to 100 km/h time of 2.8 seconds doesn't tell you anything, but reaching 200 km/h in 6.8 seconds is nothing short of breathtaking for something which can still be driven on the road. 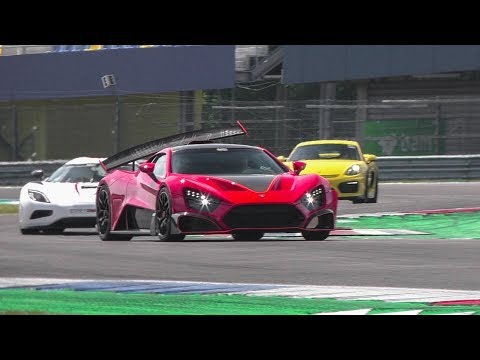