2 Hyundai Helps the 2022 World Cup Become More Sustainable, Though Only 50% of It

Home > News > U-turn
Codrin Spiridon
"Down to Earth With Zac Efron: Down Under" is a Netflix docuseries show where the Hollywood megastar embarks on a sustainable journey around the world to learn about healthy ways of living and treating our planet with care. I think there’s no need to explain why Hyundai would choose to get involved in such a project.
14 photos

Zac and his companion, wellness expert Darin Olien, were provided with an Ioniq 5 that has the V2L or Vehicle-to-Load feature, which basically turns the car into an electrical socket. In the trailer, they’re even seen making a milkshake in a blender while sitting on the backseats. They’re also using the V2L function to power other small house appliances as well.

According to the press release, the show’s target audience is Gen Z, “for whom sustainability is a core value.” Now, for those who would raise an eyebrow when they hear the term "Gen Z," know that the newest trailer for Zac’s show crossed 1.1 million views since its release on November 7. Granted, Netflix’s powerful marketing machine, together with Zac Efron’s global celebrity status, is quite the killer combo.

Hyundai even created a challenge in the extremely popular Roblox video game to further expand its sustainability campaign. In the game, players can join in Minigames and embark on Quests to learn about eco-friendly practices in daily life. These activities are meant to teach kids about zero-waste cooking, plogging (a combination of jogging and picking up litter), upcycling, drinking coffee out of reusable cups, and even rescuing endangered animals.

All of these campaigns and more are meant to raise awareness and also donations for EARTHDAY.ORG, where Zac is also involved. The second season of the show had its debut on November 11, so if you’re curious how the Ioniq 5 fairs against the Aussie outback, you can watch it at your leisure. 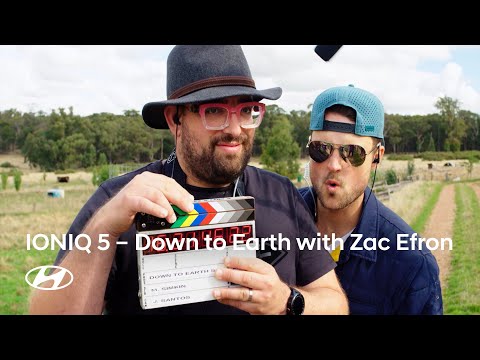