1 This Amphibious Vehicle Is Unbounded, Serves as a Camper, E-Trike, and E-Boat All in One

Z-Triton 2.0 Is the Trike-Boat-Camper That Wants to Be World’s Most Sustainable RV

Elena Gorgan
Cycling is pure joy, any cyclist will tell you. But even the most passionate rider will admit that bikepacking is not for everyone due to the limited luggage space and the relative discomfort in camping, among other things.
11 photos

As it turns out, you don’t have to rough it out or strive for an unofficial medal for the toughest and highest-endurance bikepacker. Better said, you shouldn’t have to do any of this because a more convenient, albeit more expensive, an option now exists: the Z-Triton 2.0 trike-boat-camper electric vehicle.

That’s a tongue-twister for sure, and the vehicle it refers to is equally confusing at first sight. The Z-Triton is a 3-in-1 kind of EV aiming to counter many of the difficulties a rider can meet on the road and, in the process, double as a comfortable (*but very snug) recreational vehicle. If you’re environmentally-focused, which you probably are since you’re a cyclist and are reading this, you should also know that the Z-Triton aims to be the world’s most sustainable RV thanks to a positive CO2 footprint.

The Z-Triton has been around for a few years, but progress on it definitely took a turn for the best in 2020, when the 1.0 version, the prototype, was unveiled to the world. Designed by Zeltini founder Aigars Lauzis after a bike trip from London, UK, to Tokyo, Japan, it aimed to solve the issue of sustainable transport on vacation while offering shelter from the elements, easy passage on water, and space for two people, a small pet and a potted plant.

When he returned to Latvia, Lauzis already had the idea and a first mold for what would become the unique, three-mode Z-Triton prototype. The initial plan was to bring it to market in 2021 and, by the end of the current year, have a thousands-strong community throughout Europe. It’s safe to say now that those plans were naive at best.

On the bright side, the long gestation period has allowed for more improvements, so, earlier this month, the 2.0 version of the trike-boat camper was introduced. This is the market-ready version and, unlike its predecessor, it’s not expected that many changes will appear before deliveries start. The 2.0 version brings more powerful motors, upgrades in terms of comfort and safety, and more space – as well as the promise that this will be “the future” of adventure vehicles. Because nature is just waiting to be rediscovered mile by mile – sustainably, too.

“The body is manufactured in organic fibreglass with polyester made from recycled PET bottles and a number of parts are large-format 3D printed with bioplastics,” Lauzis says. “There is also a plant pot that enables users to carry small trees that can be planted along the way to reforest our dear planet. Therefore Z-Triton 2.0 has a positive CO2 footprint and aims to be the most sustainable RV on the market.”

The Z-Trinton now rides on a smaller front wheel, but the rider sits considerably higher than on the prototype we discussed in 2020. The seat is adjustable, and rear suspension has been added for more comfort, which allows Zeltini to say you could even take the EV off-roading, as long you made sure you added a winch for extra safety. Stopping power is offered by hydraulic disc brakes. The motor is now a (comparatively) massive 1,500 W one, and there’s a seven-gear internal gear hub to help along in bike mode.

Camper mode is available both on land and on water. Thanks to a slight increase in size, the vehicle now measures 3.9 m/12.7 feet in length, 1.45 m/4.7 feet in width, and 1.72 m / 5.5. feet in height. It’s still cramped but able to offer the basics for two: a small folding table, a small meal prep area, interior lights, some storage, and a 1 x 2-meter (3.2 x 6.5-foot) sleeping area. Designers are now looking into the possibility of adding heating options, but for the time being, you’ll have to rely on warm clothing and cuddling.

Classified as a three-wheel electric moped (L2e in Europe) and a small boat, the Z-Triton does not require a special license to operate, and it can’t be used on bike paths, the highway, or in saltwater. The estimated dry weight is 200 kg (441 pounds), to which you can add another 200 kg, including the rider and passenger. You’re basically left with a total of two passengers and two pieces of luggage, according to the designers. 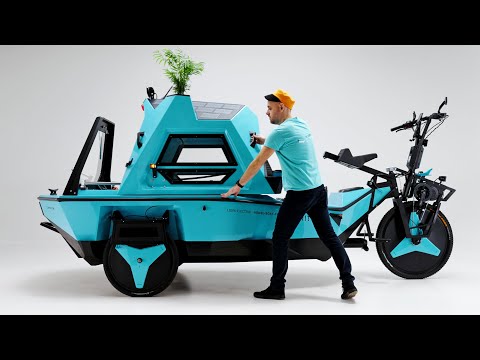