2 Is This One of the World's Craziest Engine Swaps?

3 Mid-Engined Mazda RX-7 Rendering Is the Sexiest Ever

When you think about the Fast and the Furious series, and more specifically speaking about the 3rd installment, which was Tokyo Drift, you don't really picture Edmonton, Alberta somewhere along the lines.
1 photo
Let's face it, a lot of us have grown up with the Fast and the Furious, and leaving aside what you might think of it today, the franchise has helped shape the tuning scene on a global scale, giving a huge boost in popularity to the phenomenon.

While the movies seem to have kind of moved away from the initial vibe, which actually involved cars and racing, there is someone in Edmonton, Alberta, who has put in a great deal of effort to build replicas of most of the cool cars ever to be featured in the films.

In fact, Jorge currently owns more than 20 movie replicas, including Skylines, Supras, and not just one, but two Mazda RX-7s. Although Dom's red one from the first movie is also in there, today we're taking a more in depth look at Han's Veilside orange rotary rocket.

The first thing that comes to mind when looking at this replica car is: 'Where's the rear spoiler?' Luckily, the owner does plan on having it mounted in the near future. Also, it looks like a different set of wheels was used on this project, but the original ones will be going on the car quite soon.

That aside, we're happy to see that the car is at least a right hand drive model, and it's also been converted to a single turbo setup, which means the exhaust note is pretty close to the car used in the movie.

Although quite a few people have gone the same road, with building a Veilside Fortune RX-7, most of them living in Japan most likely, it's still quite a rare car, and always an impressive one to behold! 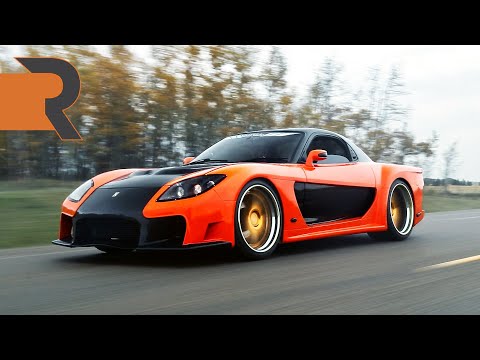