4 T-650 Quadcopter Promises a Capacity of Over 660 Pounds, Great for Military Applications

5 Could You Identify Some of These Human-Looking Robots in a Police Lineup?
Coverstory

Cristian Curmei
With technology moving at the pace it is, engineers of all shapes, sizes, and projects are showing the world what’s possible. Today, you’ll learn how to build your very own off-road, rugged, and military-grade surveillance robot.
10 photos

That’s right, folks, in our search to bring you some of the most intriguing news around, we’ve stumbled upon a project that takes you through every step needed to build a military surveillance robot that can achieve so much, it may just be a matter of time before some military general feeds this project to his troops.

Dubbed project Desert Eye, creator Aviv Butvinik reveals everything you need to know and do in order to scare the neighborhood into thinking that a war is coming up. After all, the idea behind this trinket is to give people (soldiers) the ability to survey an area before ever setting foot into it.

The idea began because Aviv wanted to build a military vehicle that could cross desert terrains and feed live video surveillance in the process. After looking at a few existing designs, Aviv went to work creating sketches of the future Desert Eye. Judging by the sketches themselves, you can tell that Aviv has got quite the amount of experience in designing such contraptions. With sketches all drawn up, it was time for a 3D rendering of what was to come.

Starting with a bicycle chain of small gauge, Aviv introduced bolts between chain links. With this design repeated, screws and nuts were used to attach the treads. Oh, if you’re wondering where to get everything you need to make this project happen, Aviv includes links to all part manufacturers in his YouTube video.

Up next, it was time for a DC motor, free-spinning roller, and a tricky mechanism meant to keep tension on the chain. Might I add that all this is much easier to complete if you have a 3D printer. With everything printed, it was time to assemble and test the tracks. Guess what, they work great!

Next, it was time to find a power source. With lithium-ion cells being the solution, a custom battery holder had to be designed. Batteries in place, it was time to give everything a brain and, to do so, a Raspberry Pi and dual motor controller were called upon in order to control things like speed, direction, and battery power output. Did I mention that there’s a night vision camera also equipped on the Desert Eye?

Also controlled by the brains are a pair of infrared light emitters, allowing for greater visibility during night missions. The addition of a long-range Wi-Fi antenna also requires an extra battery which will feed the Raspberry and motor controller as well. Put a lid on it, and that’s friggin it! You now have your very own military-grade surveillance robot. Not to mention it can all be controlled through an app on your phone! Yeah, there’s an app for that.

While the video doesn’t reveal everything you need to know about how to create your very own Desert Eye, the instructions Aviv has left on hackaday, are complete by all means and even include the files needed to successfully print, build, and control your own bot.

Honestly, with the way tech is moving, I wouldn’t be surprised if in the next couple of years or so, someone doesn’t put out a DIY kit for your very own exoskeleton. Oh wait, that’s already been done. Coming up. 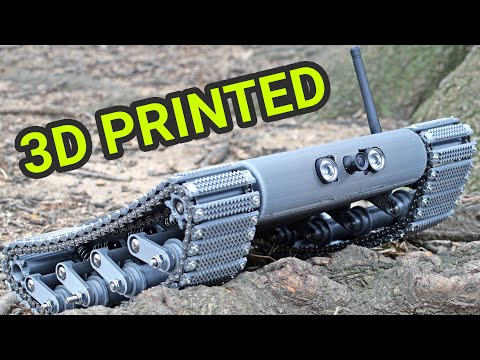 Campervan Eco Revolution Conversion Is Both Camper and Daily, Both With Zero EmissionsSee all coverstories