4 Tesla Model 3 Mall Crawler Has Powerwall on the Roof

Mihnea Radu
The Tesla Model 2 is becoming a really hot topic of discussion, and unlike with the Cybertruck, the EV manufacturer is showing a lot of its cards. Investors are probably quite happy that an "affordable" model is finally going after those mass-market customers.
4 photos

But the average Tesla fans are probably more curious to see if this is a cool car. After all, many other manufacturers make EVs as well, but they're usually not as well planned or interesting.

At first glance, the Model 2 is a bad idea. Tesla is known for cutting corners the wrong way sometimes, and with a base price of $25,000, there's a lot that can go wrong. There are a lot of unknowns too, starting with the platform it will use to the markets that will be targeted and how.

Until more info becomes available, we can at least enjoy a sketch from YouTube's favorite car designer, TheSketchMonkey. He was inspired by the official sketch posted by the manufacturer but tries to make a "photo-realistic rendering of this car."

So why start with a Tesla Model 3? Well, the artist argues that using existing parts like the headlights is a good way to keep costs down. Of course, the Model 2 is supposed to be a compact hatchback, so the proportions have to be modified accordingly.

The digital creation also gets new parts, such as the hidden door handles for the back and a kink in the rear glass pointing toward the top of the hatch opening. In our opinion, this doesn't seem like the Tesla way of doing things. Yes, the company makes electric cars, but innovation is the reason why they're so popular, and there's not a lot of that here.

We're sure that the actual production car will have outside-the-box features, though it probably won't be as cheap as they promised. Tesla base models have a habit of arriving late and being discontinued soon after because people just like the full-spec versions more. 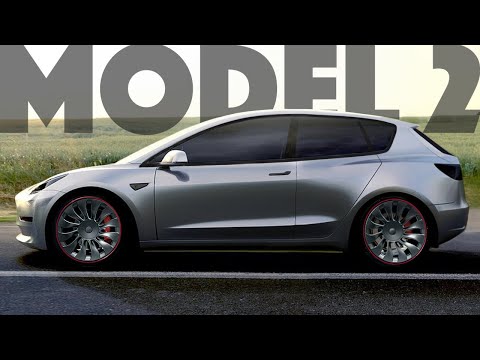