5 A McLaren 650S Slammed Into a Brick Wall and the Cops Are Having a Blast
Car video reviews:
Coverstory

You’re Never Too Old to Buy a McLaren 720S Spider, Just Ask This 78YO Grandpa

When a McLaren 720S Spider in Amethyst Black pulls up next to you, the last thing you expect to see is a grandpa coming out on the driver side. Unless than grandpa is Henry Harrfeldt.
14 photos

Henry Harrfeldt is a 78-year-old man from Norway who’s getting a lot of attention online right now, thanks to a video documenting his nearly one-year ownership of said McLaren 720S Spider in Amethyst Black. You can see that video at the bottom of the page.

Henry bought the car sometime in the fall of 2019 and, since then, he’s been driving it daily. And it shows: according to him, he’s just passed the 4,000 km mark, which means he’s put about 2,500 miles on the odometer. Asked what he likes best about the McLaren, Henry says with a smile: “It’s fast.”

Henry concedes that the fact that it’s “pretty responsive” is also important to him, but it’s speed that most attracts him. “It’s a street-legal race car,” he says with another wide grin.

While this may come across as a surprising statement from a 78-year-old man, Henry isn’t your regular grandpa. He was a professional speedway driver back in the 1960s and has never lost his love for racing, even in old age, as he explained in a late 2019 interview with local publication D2.

In the same interview, Henry said his first choice for a car was always the Ford GT but, when Ford charged him too much for a new GT, he started looking around for another option and eventually settled on the McLaren. It’s not the only car in his garage either, albeit it’s the fastest and newest: this grandpa also owns a 40-year-old AC Cobra and a 35-year-old Ford GT40, which he calls a race-car with registration plates.

This just goes to show that you don’t age out of racing. You adapt. 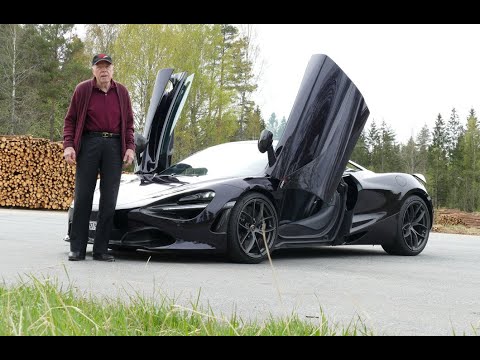