Like many other luxury carmakers, Porsche puts its name on a lot of things, from mugs to ice cube trays, pianos, furniture, clothing items and luxury yachts. Speaking of yachts, the spaceship on water Porsche designed years ago is still on the market.
11 photos

Royal Falcon One is part of the Royal Falcon Fleet and represents the combined effort of Porsche Design and Royal Falcon. Built by Kockums in Sweden, according to specifications from Porsche and a hull by Incat Crowther, it is a luxurious, fast and highly efficient catamaran. It is also for sale.

The 134-foot (41.4-meter) luxury yacht, described with this exact phrase when it was delivered in early 2019, a “spaceship on water,” was listed for sale in November of that same year. As it turns out, Camper And Nicholsons still has the listing, so this could be your chance to up your Porsche ownership to a whole new level, you millionaire.

Make no mistake about it, this yacht is the cream of the crop, and the first indication in that sense comes from the fact that price is available only upon request.

With accommodation for 10 guests across five suites (three double cabins, a master suite and a VIP room) and 10 crew, the Royal Falcon One is powered by twin 4,600 hp MTU 16V 4000 M93L diesel engines to top speeds of 35 knots, with a range of 2,000 nautical miles at a cruising speed of 30 knots. It’s fast, but also has good fuel economy, the listing says. The multihull makes it very stable at sea and at anchor.

On board, it packs amenities like jacuzzi and entertainment area, sundecks, bar, an observation lounge and several dining and relaxation areas. A true Porsche at heart, the catamaran has real leather interiors. A tender garage is also available, for all the toys you could ever want.

Here’s the video presentation of this Porsche cat, released before it was listed for sale, which is impressive in and of itself. If you like booming voices and posh accents, let this guy sell you onto the idea of Porsche conquering and commanding the seven seas. 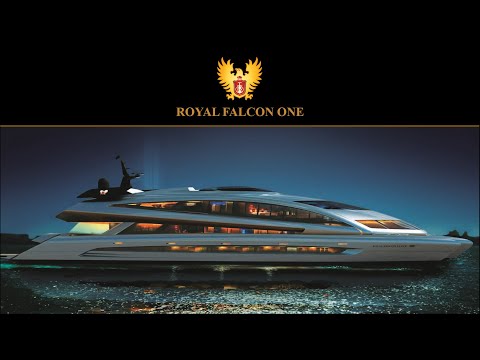