5 Lifted 1987 Chevy K10 Has Dreams of Winter, but It's Sourced From California
Coverstory

Aurel Niculescu
The natural order of things and logic might dictate the latest 992-generation, all-new zero-mile 911 Carrera 4S would be the saner option. However, do remember there is a caveat regarding the older 993 iterations.
27 photos

So, to anyone oblivious of the legendary history of Porsche’s 911 series, the iconic “rear-everything” German sports car is divided into two main eras: air- or water-cooled models. And for some, there is nothing else other than an air-cooled, vintage Porsche. Thus, if you are one of those diehards, perhaps the last version equipped with such engines is an offer one cannot refuse.

Still, we do need to check up on the highlights for this Grand Prix White (with crimson brake calipers) over a two-tone interior example that sits proudly tucked away in the inventory of Grand Rapids, Michigan-based Garage Kept Motors. The dealership's description lays certificate of authenticity claims, along with talk of a 3.6-liter boxer-six engine mated to a six-speed manual transmission, and AWD, among others.

They also say that it was a special order (the equivalent of today’s Porsche Exclusive) originating from Florida, as the client really wanted a two-tone Marble gray/black leather interior. Interestingly, this was not a garage jewel (or, at least, not all the time) because the odometer already reads a tasteful 73,284 miles (117,939 km) - and some fans might even muse that it is “just broken-in.”

However, as we return to the ardent matter of pricing, do remember that by laying a bid to snatch this GT2 rear-spoiler collectible, you would effectively churn out the same amount of cash as if buying a zero-mile, all-new 2022 Porsche 911 Carrera 4S of the 992 variety. 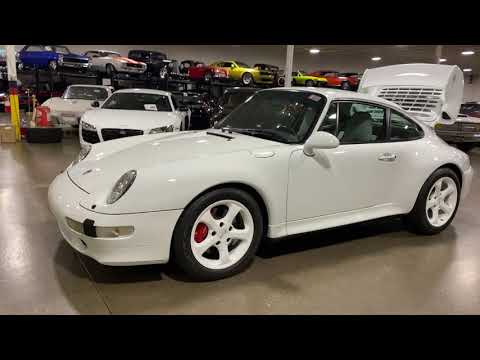