4 2023 Toyota Sequoia Boasts Standard Hybrid V6, It's As Subtle as a Rhinoceros

Toyota unveiled the all-new 2023 Sequoia back in January, then kept us waiting until earlier this week to learn more about pricing and specs. That’s all good though, because people in need of a large three-row SUV will often bide their time until a great deal comes along, preferably for something very roomy and safe.
7 photos

However, if you want the very best 2023 Sequoia, you’re going to need the flagship Capstone spec, which is what Doug DeMuro can be seen driving in this video.

Now, what might strike you about his review is just how many words of praise he had for the 2023 Sequoia, to the point where we wouldn’t blame you for raising the proverbial eyebrow. I mean, he started off by saying the interior is “gorgeous”, although again, he was referring strictly to this flagship specification.

Still, a gorgeous interior in a non-premium SUV is not something you’ll come across too often – and by "gorgeous" he meant overall quality and feel, not design.

Next up, he goes on to call the Sequoia a “luxury SUV” at one point, which is enormous praise, but I’m betting it’s not quite what he meant to say, especially since later in the video he clearly specifies that the Sequoia isn’t part of the luxury SUV segment.

As for how it drives, DeMuro used the term “absolutely fantastic” to describe the V6 hybrid engine, which again, should please just about every single individual who might consider purchasing this SUV.

In the end, DeMuro concluded by saying that the 2023 Sequoia (in Capstone spec) is the best SUV in its class (better than the Tahoe or the Expedition) and furthermore, it’s the best full-size SUV he’s ever driven that isn’t wearing a luxury badge. 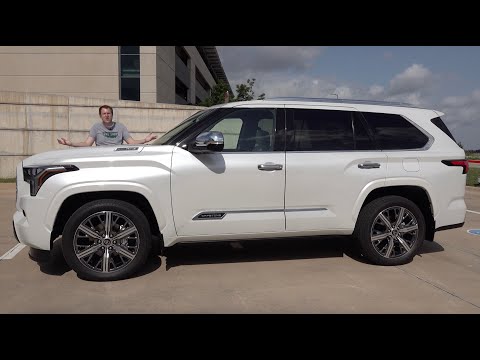