1 Blue Origin New Shepard NS-17 Has Random People’s Faces on It, Going Up on August 25

Last month, Amazon billionaire and aspiring space explorer Jeff Bezos got the astronaut wings his company custom-made after launching himself and three others to the edge of space on the reusable New Shepard rocket. As Blue Origin continues to offer this kind of flights to paying customers, there’s now something for the poorer of us, as well.
11 photos

Blue Origin and merchandising partner Estes, which makes model rockets, are announcing the New Shepard model rocket. It’s available for pre-order today, with full availability for early November but a yet to be specified delivery date. Needless to say, if you want Santa to leave this particular toy under the Christmas tree, you’d better hurry since there's a limit of five items per order.

The New Shepard toy is a 1/66 scale model of the real thing and, just like it, it can launch and land. It also bears a more than passing resemblance to certain adult gadgets, to put it delicately, so it could be that pricing is a nod in that direction: just the rocket costs $69.99. However, if you wish to launch it and land it, you will have to pay $100 for the full kit. It includes the rocket, the launch pad, the launch controller, a pack of C5-3 engines, and recovery wadding.

According to Estes, you can also launch the model rocket with a pack of C6-3 or C6-5 engines. Unlike the real New Shepard, the model one will only reach an altitude of about 400 feet (122 meters). “It too, after deploying the capsule, falls through the atmosphere under a large parachute to gently touch down,” the official description reads. “Like the Blue Origin New Shepard, you can fly the Estes New Shepard again and again.”

Assembly time is of ten minutes, and the rocket model weighs just 4 oz. (113.4 g) since it’s made of plastic. With the launch kit, you’ll also get a postcard from Bezos’ Club For the Future foundation. You can write your own version of the future on it and mail it back to Blue Origin, which will then fly it to space and return it to you with a stamp reading “Flown to space.” 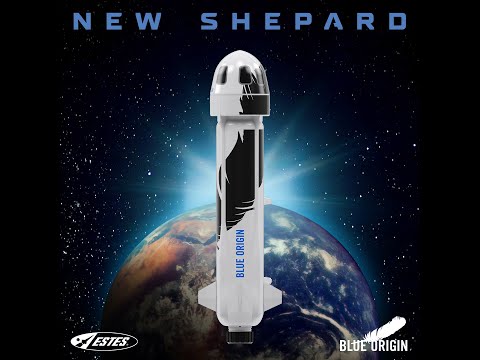