2 When You’re Stressed Out, Hop Into a Tank and Smash a Car. Legally

When in Russia, drink vodka. Play in the snow. Wear fur. Drive a tank. (And do every other assorted cliché you can think of.)
7 photos

EuroNews reports that visitors of Sokolniki Park in Moscow, the Russian capital, now have the chance to experience what it feels like to drive around in a tank.

However, while the experience is meant to be thrilling, it’s by no means true to life. As you may have guessed from the video available at the bottom of the page, this tiny tank isn’t a real tank. It’s not a toy either, but a scale model that you can actually drive and that represents the closest, legally possible means of getting a feel of what it’s like to drive one.

The tiny machine is built to resemble the Soviet T-34 from WWII but is designed to be a “fun activity cart.” It’s comfortable to sit in and it’s also easy to drive, so much so that even kids can do it with ease. Just like bumper cars are sometimes made to resemble real cars in diminutive size, this model allows regular folks to see what it’s like to operate one such legendary war machine.

It runs on gasoline and is powered by a 620 cubic meter internal combustion engine, of the kind also used in agricultural machinery, that produces 21 horsepower.

If you want the real deal, i.e. to drive an actual tank, you can do so. It’s legal but it’s probably more costly than taking the tiny war machine for a spin: there are several providers of car-smashing services, some of which involve operating a tank to complete the mission.

You can find the majority of them in the U.S. and, depending on your budget, you can do anything from ride as a passenger in a tank to actually drive it to run over cars – or even mobile homes. 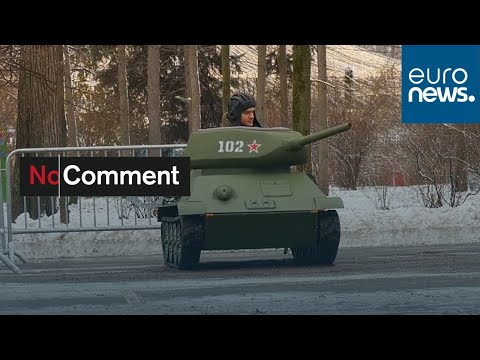