2 Tesla Will Install the First Supercharger Stations in the U.S. With CCS Connectors

You Can Charge a Kia EV6 at a Tesla Supercharger, but There's a Major Problem

Tesla’s most important asset is not its range of electric vehicles, but the underlying Supercharger network that powers them all. Even though other brands can now charge their EVs at Tesla superchargers, the experience is far from optimal. Famous Youtuber Bjorn Nyland showed what happens in the case of a Kia EV6 plugged into a Tesla supercharger.
10 photos

You can find Tesla superchargers everywhere, and they offer fast charging as well as a seamless experience unparalleled in the EV world. If you have a Tesla vehicle, you do not need anything other than park the car and plug it in. The charger communicates with the car and the billing is taken care of automatically, like magic.

In contrast, for all other EV brands that rely on third-party charging networks, the whole experience is a mess. You need to install an app (or several), set up an account and a billing option, and many times people reported the charger cannot be easily convinced to charge the vehicle. No wonder every EV carmaker on the planet dreams of having a charging network like the Tesla Supercharger. They are in luck, as Tesla recently announced it will open up its network to other brands.

The move is a win-win, with EV owners gaining access to the best charging network in the world, and Tesla gaining access to their money. They just need to install the Tesla app on their phones and pretty much go through the same ordeal they do in the case of any other charging network available to them. So it’s far from the seamless experience that Tesla owners enjoy, but at least it adds another option for charging an EV.

Of course, there’s more to it than just gaining access to the supercharger, as non-Tesla people using the network begin to learn. For starters, there are instances where the car would refuse to negotiate with the charger. And even when everything appears to go smoothly, it might not. YouTuber Bjorn Nyland discovered that the Kia EV6 and Tesla Supercharger don’t always mix very well together, even though the charging starts as expected.

The problem is, the EV6 fails to properly lock the plug, so everyone can disconnect the plug while the owner is away from the car. This could be just a teething problem that will be corrected in a future update, but it is nevertheless problematic. We don’t know if this is just the Kia EV6 having this kind of problem, or it’s something happening with all other non-Tesla EVs. Failure to lock the charging plug can lead to serious conflicts between drivers, as all it takes to unplug a non-Tesla from a supercharger is to press the button on the plug. 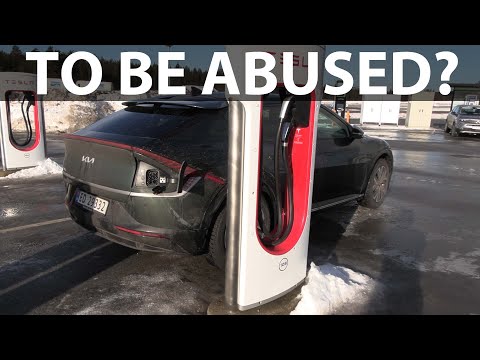