1 Bigtoe and Smalltoe, the Tallest and Smallest Motorcycles in the World

2 The Karlmann King Is Still World’s Most Expensive SUV, Still a Dumb Idea

4 The USS Compensator Is a Bonkers Lincoln Monster Truck Limousine

5 eleMMent Palazzo, the Monster RV That Is World’s Most Decadent and Expensive
Car video reviews:
Up Next

Harley-Davidson Ego Shooter Is Not Your Usual Rocker

Go big or go home. In the case of YikeBike, the goal has always been “small.” The smallest, according to the Guinness Book of World Records.

YikeBike, World’s Smallest Folding Electric Bike, Is Unlike Any Other

June is autoevolution’s Two-Wheeler Month and today we’re honoring another two-wheeler record holder: the world’s smallest and most compact folding electric bicycle, the YikeBike. The YikeBike is less of a traditional bicycle and more of a type of electric mini-farthing.

It looks silly both in photos and in motion, it doesn’t have great performance (as compared to current electric bikes) but it does have this going for it: it’s the smallest folding two-wheeler, it’s electric and it looks like a lot of fun riding. If you don’t mind looking slightly ridiculous.

The YikeBike actually goes back to 2009 and, considering the advancements made in e-bikes in the past couple of years, it’s surprising it hasn’t been beaten as the world’s smallest. But here it is: a mini-farthing invented by Grant Ryan in New Zealand, and perfected over the course of 5 years.

The first model of the YikeBike was called Fusion and is no longer in production. Why, yes, the YikeBike is still very much around and available for order, though the company is looking for a merger or full acquisition. Its current lineup includes the base Model V and premium Model C, and the cheapest configuration is $4,995. Not cheap at all.

The model that holds the record is Fusion. Guinness certified it in 2010: weighing 10 kg (22 pounds), it could fold down to 15 x 60 x 60 cm (6 x 23.5 x 23.5 inches) and could easily be carried on the shoulder or in hand. Because it was so light and compact, its makers never even bothered to think of a way it could be locked or secured outdoors – why would anyone want to leave it out when it could be carried inside so easily?

Indeed, while the design will bring a smile to any face, there is no denying the compactness or functionality of the e-bike. Getting used to riding it is just as easy, the makers say but, if inexperienced riders are having trouble, the Model V comes with an extra third wheel. So they can look even more ridiculous train for as long as they need before going out on just two wheels.

The need for a third wheel could be necessary for most riders, as you can see in the video below. This is no regular bike: the handlebars placed at the back and are used as controls for direction. There’s a seat too, and the overall impression when seeing someone on a YikeBike is that they’re riding a rolling chair with only two wheels.

The difference between the two models is in height, materials used, weight and range. Model C, being the premium offer, is made of carbon fiber and has a battery that promises a range of 20 km (12.4 miles), while the Model V is made of aluminum alloy and can only go 14 km (8.6 miles) on a single charge. With this kind of range, the YikeBike is a first- and last-mile solution only.

Both models have a top speed of 23 kph (14 mph) and you can’t increase that since there are no pedals to get you moving faster. Instead of pedals, riders get footpegs, so they only move thanks to the 0.2 kW brushless motor in the front oversized wheel. The rear wheel trails along. ABS braking, integrated lights (including turn light) and regenerative braking are also part of the package.

The idea of a YikeBike may seem silly, but obviously a lot of thought and effort went into making it. And it’s not just Guinness recognizing it, either: the YikeBike won several awards, including the Green Dot award for sustainability, the German Design Award, and the HiTech Hardware Award. It was also a finalist for the Katerva Award (a.k.a. the Nobel Prize for sustainability) and is on permanent display at London’s Design Museum, in addition to being covered by some of the most prestigious publications of our time.

All these are not enough to justify that insanely high MRSP, but can you really put a price on freedom? 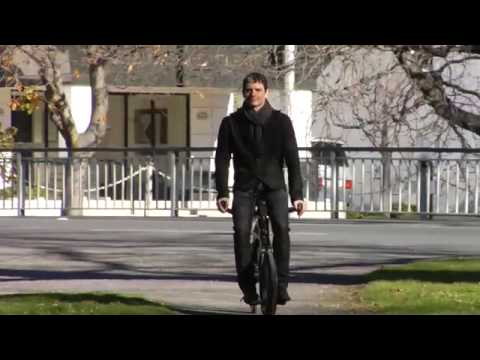