The Patriarch of All Corvairs Is Selling 28 of Them, Will Keep 40 for Himself

Most Blue Oval aficionados will agree that an original Mustang needs to come with the earliest model year possible. But let’s be frank, even later ones are nothing to sneeze at.
22 photos

For example, the 1973 model year was the final one for Blue Oval’s original pony car. The Mustang II that immediately followed was quite different from the OG. And, frankly, easily forgettable or even downright controversial. As such, some say the ‘73 shows how the original pony became the best of the breed.

Sure, the slightly sleeker, more muscular styling, along with the cool performance, as well as the great bang for the buck were all easy highlights. Not to mention the newly acquired movie star icon status after netting an important (Eleanor) role in the original, 1974-released “Gone in 60 Seconds.”

Now, this yellow 1973 Ford Mustang Mach 1 SportsRoof is as far off from Eleanor as it gets. After all, the original movie cars were 1971 model years, and they were never proven to be Mach 1s. Still, one can easily stand out in any Classic Mustang aficionado crowd with help from a “beautifully restored” example. One dressed up in conspicuous yellow-and-black attire.

It resides proudly in the inventory of Grand Rapids, Michigan-based Garage Kept Motors with 85,180 miles (a little over 137,000 km) on the odometer. That means it has been tender-lovingly driven on what can be assumed as a regular basis, but never road-trip abused. That perhaps falls in charge of its next owner, who knows?

Anyway, we are here to discuss the potential qualities and nuisances. Summer is still a long way ahead, after all, even though we already imagined driving this yellow Mach 1 all over America just like a busy bee in search of some classic pony car nectar. There we go, daydreaming once again!

Of course, since there is also a 351-cubic-inch (5.7-liter) Ford V8 under the hood. Not to mention an asking price of no less than $42,900 on the dealership’s dedicated online page. 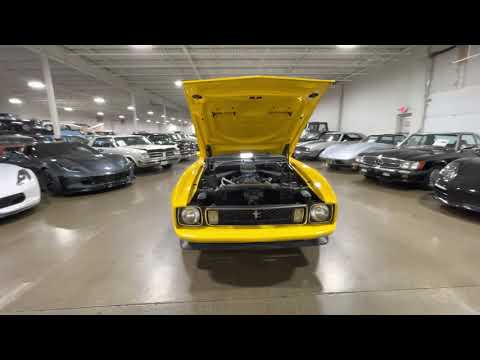