5 Tesla Plaid Drags Redeye Challenger, Charger and Loses - But There's a Big Catch
Up Next

Aurel Niculescu
Whenever bikes and automobiles have a race encounter, sparks will fly. If not literally, at least figuratively. This is the better case because that means no accidents are involved and we can enjoy the shenanigans knowing that everyone is safe and sound.
22 photos

Just recently, a reckless C6 Chevrolet Corvette driver highlighted the perils of engaging in the traditional stoplight battle. We strongly condemn such practices as most often than not will put everyone involved (along with innocent bystanders) in jeopardy. Besides, there is an effortless way to indulge in automotive shenanigans.

Just take the need for speed at the drag strip. That’s probably what this Yamaha FZ-09 rider did. So, the latest video (embedded below) coming courtesy of the Drag Racing and Car Stuff channel on YouTube focuses on the yellow motorcycle and its quarter-mile exploits against a full roster of competitors.

And there is a specific reason we mentioned “America’s sports car,” since the Corvette’s C7 and C6 generations headline the first couple of battles. First up comes the newer version, though both could easily qualify for the prize of sibling motivation since the C7 and C6 ended up posting an identical ET. Unfortunately for the Chevy fans, it was not enough to best the lightweight bike.

A BMW coupe dared to address the issue next (from the 0:55 mark) but its performance was on par with the Corvettes before it. Meanwhile, the Yamaha rider was constantly posting mid-high 11s results, enough to comfortably win these three skirmishes. It even tried to up its game for the encounters with the heavyweights (a Nissan GT-R from 1:17 and AMG GT S at 2:08), but its 850cc engine can only do so much...

Nevertheless, we feel the most interesting battle occurred at the 2:40 mark when the FZ-09 went up against a white Mercedes G-Class (probably of the AMG variety). The size discrepancy is hugely entertaining, especially when considering the hulking SUV leaned back and seemed ready for takeoff most of the way... 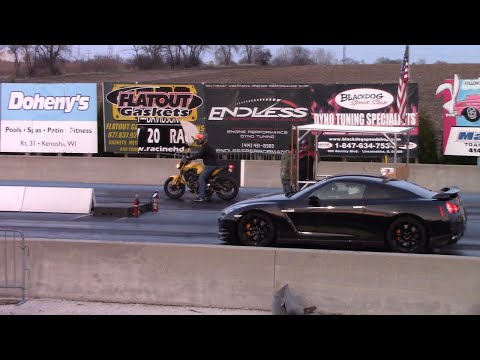