1 Shaping the Future of Delivery, Robot Serve Doesn’t Need a Delivery Man to Bring You Food

2 Creepy Robot Combines Walking With Flying, Watch It Ride a Skateboard Like a Pro

3 Spot-Inspired Robot Dog Is Almost as Smart but Made of LEGO, It Can Walk and Dance

5 Meet Mini Pupper: the Robot Dog That Is Just as Smart as a Border Collie
Car video reviews:
Up Next

This Ex-U.S. Navy Jet Hydrofoil Flew Across the Water, Now It Rots in an Oregon Mudflat

What if you prevent petty crime before it happened, or stop it in the early stages? That sounds like the premise of many dystopian novels and films, but for the people of Singapore, it’s reality – partly due to Xavier, the latest patrolling robot.
6 photos

Singapore is one of the safest countries and cities in the world but, at the same time, it’s also the one with the highest level of public surveillance. The introduction of Xavier, in a limited multi-agency trial program last month, which has just been expanded, is raising serious concerns on privacy and the level of control and monitoring the state has over citizens, EuroNews reports.

Xavier is a wheeled robot fitted with seven cameras and one large display. It patrols pedestrian areas and records footage of various transgressions, from smoking in places where it’s not allowed, to failure to maintain social distancing, illegal bike parking, or instances when scooters or bikes are being ridden on public footpaths.

The state agency who built Xavier calls these “undesirable social behavior,” with one representative telling the media outlet that real officers in the control room will have access to the footage with the transgression, and thus punishing the culprits becomes a matter of fact. Using robots instead of actual officers is more convenient, as well: Xavier can prevent hawking and illegal sales in the areas it patrols, so real humans won’t have to go out in the field to do it.

The project has been plagued by privacy concerns from the start. Back last month, authorities told the media that people “actually wanted” a safer environment where policing relied heavily on technology, even if that meant being recorded whenever they set foot in a public space.

Meanwhile, digital activists are saying this is yet another step toward full invasion of privacy. Singapore already has over 90,000 police surveillance cameras with facial recognition and plans to double the number in a few years’ time. It now has patrolling robots rolling among pedestrians – and the worst part is also the most ironic: people don’t even seem to mind it all that much. 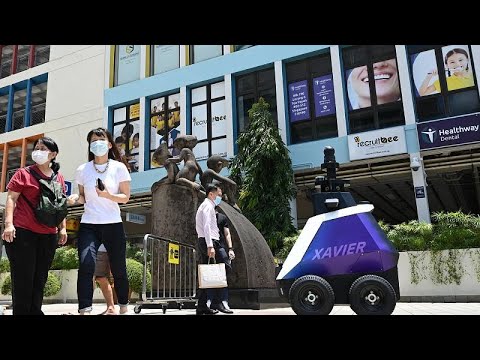