1 Polikarpov I-16: the WWII Fighter Pilots Preferred to Fly With the Canopy Removed

2 WWII Era Ryan ST's Shiny Metal Skin Shines Like a Diamond, Worth a Few Carats Itself

It’s not every day that you get to dig up a WWII “tank” that’s been lost for decades and, because of it, became the stuff of urban legends, but farmer Daniel Abbott can brag of having done it. Next year, if all goes well, that tank will become Europe’s only drivable unit.
7 photos

This is a happy-ending story, even if didn’t start like one. In 1947, a large area around Crowland in Lincolnshire, England, was hit by very severe floods, due to a combination of heavy snow and thawing, high tides and rain. To keep the water at bay, 16 Buffalo “tanks” (LVTs, more specifically, or Land Vehicles Tracked) were dispatched to create a dam.

Of these 16 LVTs, 5 floated away, and only one was ever recovered. Two were believed to have been washed away, and two fell into holes that had been dug up to keep the water from further flooding dry land. One was dug up after 74 years, after a 3-year operation spearheaded by farmer Daniel Abbott.

That LVT is on track to become Europe’s only drivable unit, after a challenging restoration process completed with help from a team of volunteers, Lincolnshire Live reports. Abbott dug up the LVT in the spring of last year, after he was able to track it down with metal detectors on loan from RAF (Royal Air Force).

Digging up the machine was no easy feat, but getting it cleaned up and restoring it was even more so, even though it had been preserved well under more than 30 feet (9.2 meters) of muddy soil. The Buffalo has been on static displays this summer, but Abbott is hoping it will be fully drivable by the next one. It has a new engine, shipped all the way from the United States, and a restored gearbox, but it still needs work on the electronics and replacing some rusted parts.

“It runs like a Swiss watch,” Abbott says for the media outlet. “We've had new tracks fitted. We have a working engine and a working gearbox. I think over the winter we will look at it all and next summer, fingers crossed, it will be driveable.”

If all goes to plan, this unit – vehicle number 47 – will become Europe’s only drivable Buffalo. It is believed that it was used during WWII in the crossing of the Rhine in March 1945 and, according to Abbott, its bodywork still tells some of its now-obscure story. It’s the reason why Abbott opted to keep it original, without repainting: it has names scratched in the paneling, the hand-painted symbol of the bull head of the 79th Armored Division, and “all ok” painted on one of the panels. 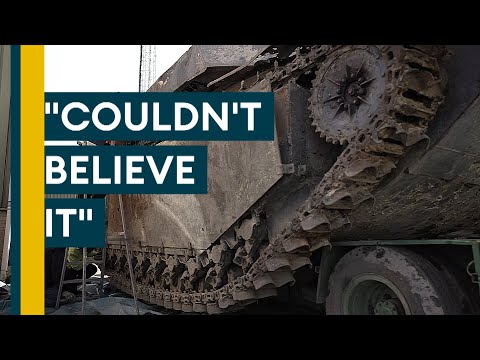