3 Never Saw This One Coming from Harley

The Maserati Alfieri V8 Sings for the First Time at Villa d'Este!

Would You Pay Mercedes M-Class Money For A Flying Bicycle?

If you are a person who needs speed and adventure, but still wants to keep it off the hook, you will probably need to take a look at the world’s first flying bicycle, the Paravelo. It’s the creation of two British inventors and will cost you the same as you’ll pay for a brand new Mercedes M-Class, but it's totally worth it.
5 photos

Designed by inventors John Foden and Yannick Read last year, the Xplore Air is now on sale at the exclusivist retailer’s online shop, Hammacher Schlemmer. It’s allegedly the world’s first bicycle that doubles as a flying ultralight para-trike aircraft. What is even better, it runs with biofuel so you’ll be a friend of the environment while flying it.

The vehicle is made out of a folding super cool bicycle that comes with a trailer powered by a light fan and a fabric wing that doubles as a tent. The two-stroke engine will help you achieve speeds of 25 mph (40 km/h) while in the air, with a maximum range of 75 miles (120 km) per full tank.

You won’t have to worry about any license what so ever, considering the “flycycle” is designed to cruise at pretty low altitudes. Still, you should not attempt to go any higher than 4,000 feet (1,219 meters). On the ground, it operates like a conventional bicycle. Being only 4 feat wide (1,21 meters), it can ride in traffic when the para-wing is not deployed.

It’s equipped with a three-blade carbon fiber propeller and the frame is made of high-grade aluminum, so weight definitely won’t be an issue. Be advised though, the Paravelor is not that easy to control so you’ll probably want to get some proper training before you start cruising the sky. 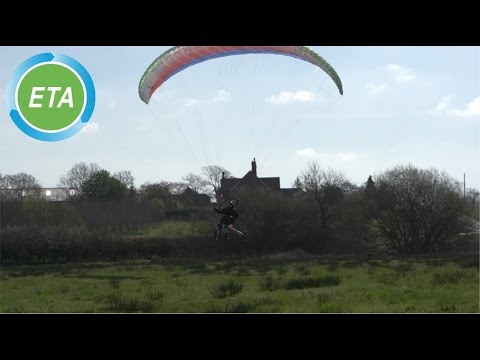