1 Father and Son Go for a Drive in Style in Gorgeous, Wooden Rolls-Royce Boat Tail

2 Sustainable Urbanism Is About Building Your Own Wooden Bike, Here’s How You Do It

5 How About a Perfectly Drivable Cardboard Version of the Most Expensive Car in the World?
Car video reviews:
Up Next

Rapidly heading toward one million subscribers (not nearly as many as he deserves), Truong Van Dao of the ND Woodworking Art YouTube channel has gained a solid reputation with his wood crafting skills. Most of his fans describe his drivable, wooden cars as masterpieces that should belong in a model museum. And while so far, the Vietnamese artist has mostly delighted our visual sense with kid-sized four-wheelers, now he lets us know he’s just as good at restoring bicycles as well.
17 photos

One of the most recent ND Woodworking Art creations we gazed at in pure awe was a wooden version of the extravagant Rolls-Royce Boat Tail. The downscaled version of the four-wheeler might not go for $28 million like the real thing, but it still maintains that elegant vibe, it is drivable, and makes for one heck of a toy for the artist’s toddler, who gets to test drive of all the exquisite wooden cars made by his father.

On to his latest art project, the wood artisan goes to confirm once again that one man’s trash can turn into another one’s treasure if there’s enough talent and ambition involved. And the guy behind the ND Woodworking Art YouTube channel has got what it takes to take a beaten-up old bicycle and give it the extreme makeover of its life.

The two-wheeler was deserted in a landfill, all dusty and covered in rust, but Truong Van Dao decided to give it another chance, sensing that it still has some life left in it. He quickly hosed it down and gave it a quick test ride that proved his instincts were spot-on, as the bike was still functional, although its front wheel quickly came loose.

Doing what he does best, the artist transformed the two-wheeler into a real head-turner, proving once again that he can make anything from wood, as the “About” section of his YouTube channel clearly states.

The bike got a fresh paint job, a cool-looking wooden frame, new wooden fenders, a new chain, and was even electrified.

You can watch the entire restoration process in the video below. 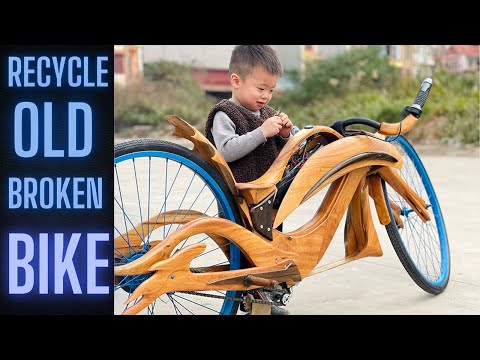