4 Autonomous Snake-Like Robot Eelume Is an Underwater Torpedo, It Landed Its First Contract

5 SAIC Motor Kun Concept Is a Self-Driving Luxury Sedan That Flies and Drives Underwater
Car video reviews:
Up Next

Remembering the Golden Sahara, the Most Famous American Custom and a Technological Wonder

World’s Smallest Underwater Scooter Ready to Make Waves, Can Even Charge Your Gadgets

One of the many wonders of modern technology is that a cylindrical contraption like this one, almost as small and as lightweight as a regular bottle of water, can be actually considered a vehicle. Previously known as “diver propulsion vehicles,” underwater scooters are some of the coolest water toys. And the Subnado is even more spectacular, boasting several innovations.
7 photos

Waydoo, the company that launched the popular Flyer ONE e-foil a couple of years ago, is gearing up to introduce its first underwater scooter. Measuring only 38 cm (17.9”) in length and 6 cm (2.3”) in width and weighing only 1.4 kg (3 lb), the new Subnado claims to be the smallest and lightest vehicle of its kind in the world.

Made of aluminum, it’s sleek and lightweight enough to be fitted into a backpack, compared to conventional underwater scooters that are much heavier and bulkier. Also, instead of the proprietary charger that typically comes with underwater scooters, the Subnado features a 100W charging system that enables it to be charged with any USB charger. What’s even cooler is that this tiny scooter can even act as a portable power bank, thanks to a “reverse charging system” with a 100W output. So you can even charge your smartphone, camera, or other gadgets with its help.

Another advantage of this small scooter is that it can be attached, fast and easy, to almost anything, from your arms or legs to surfboards. In addition to the quick-release mounting system, it also comes with an intuitive controller that can be worn around the index finger and controlled with the thumb.

Equipped with a 98Wh lithium-ion battery, Subnado can reach a top speed of 1.4 m/s (3 mph) and can run for almost an hour on a single charge. This also depends on the diver’s weight. But those who want even more speed can attach two of these scooters to their arms or legs, which would get them to 2 m/s (4.4 mph). In terms of depth, the Subnado can go as far as 60 meters (197 feet).

This innovative water toy is gearing up to become just as popular as the Flyer ONE. Waydoo announced that it’s going to launch a crowdfunding campaign for the Subnado on Kickstarter from late March to early April 2022. 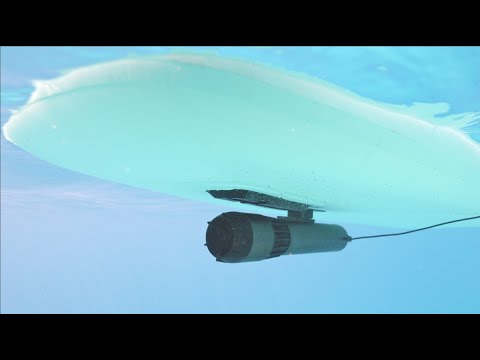