1 Life in a Tent on a Hand-Built Raft Is the Definition of Downsizing, Floating Off-Grid

3 $14,000 Skoolie Conversion Is the Best Way to Live Rent-Free, Off-Grid and On the Road

The tiny house movement is often presented like the gift that never stops giving. It’s a viable solution in the housing crisis, it has reduced impact on the environment, it comes with reduced costs, and it offers freedom to move around. But how tiny can a tiny really be?

Google “world’s smallest tiny house” and one answer that will show up is Glen Bunsen’s self-sufficient, extra small tiny on wheels. It’s so small it can even fit in the back of a regular-sized van and, despite offering no more than 25 square feet (2.3 square meters) of interior space, it comes with all the basic creature comforts: a toilet with solid waste management system, running water, graywater recycling, a shower unlike any other you’ve seen, a wind turbine, and all the perks of joining in the tiny house movement.

Below is a short documentary about the smallest house in the world, which, unlike most tinies, never got a proper name. On the official website, Glen Bunsen says that his house is “1% science, 1% stuff, 98% woke,” literally green and as mobile as his willingness to push it to its next location. “I couldn’t believe how big these ‘tiny houses’ were,” he says. “So I made an actual tiny house. I’m not about space. I’m about time. And I have lots of time now that I live wherever I need to go. Wherever I need to be, I’m already there.”

In reality, the documentary is a mockumentary, and Glen Bunsen doesn’t exist. But this tiny does and, as of January 2021, it was still around. It’s actually the creation of Boston artist and sculptor Jeff Smith, who took two years out of his life to create a tiny that would take the tiny movement to its extreme, while exploring how small he could go and still maintain the space functional.

By all means, even if it’s more of a joke than an actual tiny, the crate-sized thingy is functional. The floor in the single room serves as both bed and lounge, there’s a skylight that opens for when you wish to stand up, there is a small sink that sprouts water from a canister, and a single-burner oven that is the very definition of a hazard in such a cramped space made of old wood. Water from the sink is redirected to the flower beds outside the window, where you could grow arugula.

There’s also a hole in the floor covered by a Frisbee in lieu of a toilet, with the “waste management system” being a steel tray filled with kitty litter. Fancy! The shower is a coffin-shaped container made from thermoplastic sheet material that sprays fine jets of water all over the body and, according to Smith himself, takes all the pleasure out of showering. You don’t have room inside or up top to store the shower container.

The tiny is made entirely from recycled materials, from the boards of wood to the repurposed pie plates used for the porthole windows, and the barn door recycled for the entryway. The whole thing weighs 500 pounds (226.8 kg), so it takes some effort to wheel it around, even given its diminutive dimensions (7.325 feet / 2.2 meters long, 3.675 feet / 1.1 meters wide, and 3 feet / 0.9 meters high).

One year after its introduction, in 2016, Smith listed the house for rent on Airbnb, asking $55 a night. The listing is no longer live but, based on the coverage it got at the time, even in international media, it’s probably safe to assume it got some bookings.
Speaking with HyperAllergic that same year, Smith explained that his tiny was a study on the tiny house movement and an attempt to take it to the extreme while retaining functionality, but also a lampooning of it. “There’s some fantasy to the whole idea — would you really want to live in a tiny house?” Smith said. Would anyone still want to live in it if it were this small? His creation is so small it fits inside a van. “The obvious retort is, ‘Why don’t you just stay in the van?’” Smith told the same media outlet. “But I say, ‘Who wants to live in a van? I don’t wanna live in a van. That’s tacky.’ You want a house that’s beautiful and functional.”

YouTuber Ryan Trahan put these claims to the test last year, when he agreed to the challenge of spending 24 hours inside the tiny, which was initially parked outside Harvard University. Since it has no heating (and no AC), this was easier said than done. Trahan also had issues with nosy passers-by who kept trying to break in, and with the police, because he wasn’t allowed to park his house there. But at the end of the challenge, he declared Smith’s creation, the smallest tiny house in the world, livable (*directly proportional to your standards). 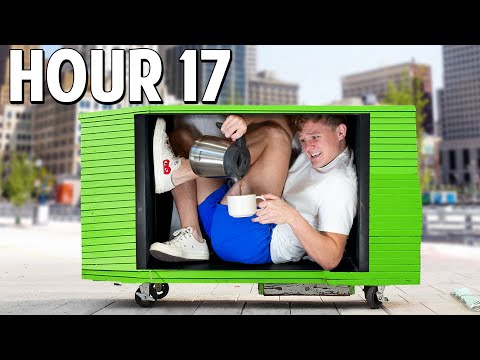