4 The Cheapest Electric Car in the World Is Actually Decent, Though Silly-Looking

The First A321XLR Development Aircraft Is Coming to Life in Hamburg

Elena Gorgan
The Peel P50, a classic by all means but one with a very special kind of appeal, also holds the title of world’s smallest production car. As of December 4, it has added another notch on its belt, as it was able to complete a cross-country drive for charity.
9 photos

The Peel P50 took its time, but it did it: a newer model of the ‘60s classic three-wheeler completed a drive across Great Britain in three weeks, as planned. Along the way, it raised money for charity and, in quite the most literal sense, put a lot of smiles on a lot of people’s faces.

Alex Orchin is the man to thank for both. He set out of Scotland on November 13, at the wheel of a 2017 model of the P50, and completed the 900-mile (1,450-km) journey in Land’s End in Cornwall last weekend, the BBC reports. The journey wasn’t without issues, like the time the door simply came off, but as the video below shows, it was also plenty of fun.

As we previously reported, Orchin did all the driving on the trip, though he wasn’t alone. A friend tagged along in a campervan that he used for sleeping and meal times, and generally to stretch his legs. Make no mistake about it, he needed plenty of stretching of the legs, since the P50 is incredibly small (4.3 feet / 134 cm long, and just 3.1 feet / 98 cm wide).

The P50 is also very slow, with a top speed of just 23 mph (37 kph), twice faster than you’d want to go in traffic in a three-wheeler with exactly zero safety features. Moreover, Orchin says he was able to hit the dizzying speed of 50 mph (80.5 kph) on the motorway, but he was traveling downhill.

Peel was directly involved in the record trip, offering Orchin a brand new engine for his microcar. The feat benefited Children in Need, for which Orchin was able to raise £10,000 ($13,300 at the current exchange rate), in addition to the donations he received that allowed him to complete the journey, like money for gas, overnight accommodation, and plenty of tea and cheese. 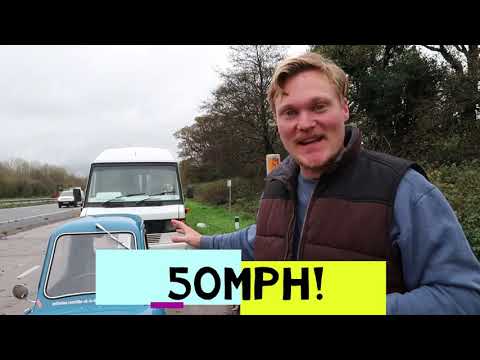