4 Confirmed: Lightning Motorcycles Is Working on a Fully-Enclosed e-Bike

5 Gogoro’s Eeyo 1 e-Bike Is Super-Light and Fast, Smart and Innovative
Car video reviews:
Up Next

Hovding is a Swedish startup that makes airbags for cyclists. The idea itself may sound silly and admittedly looks the part, but Hovding can now boast of making the world’s safest helmet thanks to the third iteration of the product.

In order to understand how the idea of an airbag for urban riders came to be, we need to go back to 2010, when the first version of Hovding appeared. It was initially meant to be a couture take on the classic helmet and was designed with women in mind. After all, nothing can ruin a lady rider’s day like a bad hair day, and that is a fact.

Taking cues from airbag technology in the auto industry, Hovding created a collar-like device that contained the airbag, which would deploy in case of a fall. As such, it provided many benefits over the traditional helmet, in that it was small and comfortable (although not that small, if we’re being honest), but also fast and efficient in an emergency.

The third iteration of the product, Hovding 3, was released last year and it brought several major improvements to the OG. Now slightly smaller, the inflatable helmet is also smarter, more connected and comes with a longer battery life. More importantly though, it has also been proved to be more efficient than a traditional bike helmet – about 8 times more so, according to a June 2020 study conducted by Swedish insurance company Folksam with support from the British Road Safety Trust.

And that should address the frequent question of “why not opt for a regular bicycle helmet instead of this collar-like device?”

“Hovding 3 provided the best protection and scored the best test results by far concerning shock absorption as well as oblique impact mitigation,” Folksam says, according to a press release. “Compared to the worst performing helmet in our test, Hovding offers a seven times lower risk of brain injury.”

“This is an incredibly strong endorsement of Hovding’s protection ability,” CEO Fredrik Carling says. “Folksam’s tests are thorough and exceed the law requirements. Hovding’s superior results make us more determined than ever to carry on with our mission to protect even more cyclists.”

Hovding 3 inflates in 0.1 seconds from the moment sensors pick up abnormal movement, surrounding the neck and head in a protective, soft, helmet-like airbag. You can see an over-dramatic video of the airbag in action at the bottom of the page. According to the maker, the sensors read the cyclist’s pattern 200 times per second, so chances of it deploying by accident are slim.

With the third iteration, the airbag comes with Bluetooth connectivity and can now contact an emergency number or a chosen contact in case of an accident. By pairing it with a smartphone and using the dedicated app, riders can monitor routes where accidents take place (and report them themselves), and thus help create the infrastructure for safer roads.

Hovding 3 comes in one-size and is easily adjustable thanks to a BOA dial, and turning it on is a matter of pressing a button. Buyers can even customize their inflatable helmets by ordering them in differently colored fabrics – for those days when you feel like you must color- or print-match your helmet with the rest of your outfit. A two-hour charge is now good for 15 hours of continuous use while riding, so that’s an improvement as well.

Hovding says over 185,000 bikers are using the product and that more than 5,200 have reported it saving their life or protecting them from severe injury in case of an accident.

Pricing for the Hovding 3 airbag / inflatable helmet starts at €249 ($283) and goes up to €349 ($397), if you’re particular about having it in a more fancy print. You can also get separate covers for extra charge, and it’s still a far cry from the approximately $3,000 product that was first introduced to the world so many years ago. 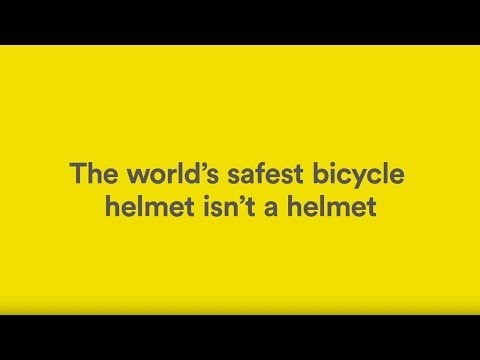