2 The Story of the Alfa Romeo Carabo, the Concept that Pioneered the Scissor Doors

3 Here’s What To Consider Before Buying a Mondial, The Cheapest Ferrari Out There

4 The World’s First Production V6 Was Born in Italy, This Is Its Fascinating Story

Everybody loves a good barn find story, especially when the barn find itself is a rare example in a relatively decent condition – a sort of message-in-a-bottle-kind of find, with the allure of a timeless and very expensive automotive classic. Throw in the mix the phrase “world’s oldest Ferrari barn find,” and you’ve got yourself an amazing story.

But nothing is rarely as it seems or, if it is, it takes a while to establish as fact. The latter seems to be the case with chassis number 9471, a 1967 Ferrari 330 GT 2+2 Series II that claims to be the world’s oldest Ferrari barn find. Currently in Sydney, Australia, the vehicle was discovered in a barn on a private property in rural New South Wales, Australia, early last year, after being mothballed for close to five decades.

As of the moment of press, the vehicle is yet to be authenticated by Ferrari’s Classiche Department, even though they initially seemed to back the story at the time it was discovered. Australian publication Drive notes that “some conjecture about the total accuracy of [the original] account” has been raised, and it has led to a delayed process of authentication.

But if the Ferrari is what it seems to be, it will be one for the history books: an Italian classic lost in a ripple of time, found by accident and then brought back to its glory self. It could also be a very expensive Ferrari, with estimates saying it could be worth close to $750,000 if the story checks out and the full restoration is complete.

And what a story this 330 tells! It rolled out of the factory in 1966 and made its way to the UK, to the Maranello Concessionaires Ltd in Egham, Surrey, from where it was purchased by the original owner in February 1967. All signs point to the fact that this is the first production car for the 1967 production year, and the first Series II ever made. It is also one of the 35 ever built in right-hand-drive, and quite possible one of the 25 surviving RHD examples today.

While in the UK, the 330 had three separate owners, as per Barn Finds, all of whom put a total of 33,379 km (20,741 miles) on the odo. Between 1973 and 1974, before the Ferrari made its way to Australia, it underwent a makeover: the original Azzurro Blue paintjob was replaced with Ferrari red (Rosso Corsa), and the blue and gray leather interior was replaced with white with black and red checkered fabric. The wheels were replaced, but the original Ferrari wire wheels were kept in storage.

In October 1974, the Ferrari sailed out of Flushing, Cornwall, on its way to Sydney, Australia. Over the next few months, it would go through at least a couple more owners, before ending up with an international pilot who, that same year, put it in storage and never took it out. During its time in Australia, the Ferrari was not registered so, by all accounts, it was never drive. The last owner passed away in 2020, and an estate dispute led to his widow selling the car with no clue about its potential value.

Supercar Advocates got it in late 2020, and did a thorough video presentation for it, which you can find at the bottom of the page. Reports online claim that this was the new mystery buyer, but there’s no way to verify it. What is known, though, is that, at around the same time, it was “shown off at an official Ferrari-sanctioned Sydney arcade,” with “representatives of the brand endors[ing] the narrative provided by its owner,” as per Drive.

Right now, while awaiting certification, the Ferrari is undergoing a full restoration. Having been kept in a barn for 46 years protected it from the elements, but it still bore the tell-tale of signs of the passing of time and neglect: rust and water damage to the underbody, cracking and chipped paint, and an engine that had been at least partially altered.

Speaking of modifications, the hope with Ferraristas right now is that it will be restored to its factory form: when it was uncovered last year, only the dashboard, the gearshifter, the wheel, and the radio were still original. But the Ferrari still had the V12, 296-hp engine mostly intact (the cylinder heads had been repainted at some point), mated to a 5-speed manual transmission. Just as importantly, it still had all the documentation of purchase and import to Australia, along with owner’s manual and original accessories.

In short, this rare Ferrari, no. 9471, has all the right ingredients to become a prized time capsule and a record-breaking Italian classic. Once all the details are ironed out (specifically about the makeover and where it was performed), and the literal and figurative cobwebs are removed, this 2+2 will take a seat right there, among the greats. 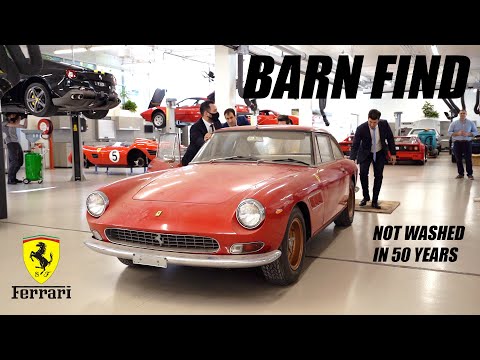