1 Iggy Azalea’s Beef With American Airlines Is All Her Fault, Apparently

5 Your Next Luxury Private Jet Could Be This Game-Changing eVTOL With 36 Motors
Car video reviews:
Coverstory

Not everyone was lucky enough to be born with a silver spoon in their mouth. Some drank oil instead of milk in their feeding bottle.

World’s Most Expensive Private Jet Is the “Floating Palace,” a Gold-Plated Boeing 747-400

The Sultan of Brunei is one such fortunate case. Once the richest man in the world (he held onto that title until the early ‘80s), he remains one of the most eccentric one-percenters out there, and his eccentricity is probably doubled by the fact that he is the second-longest reigning monarch after Queen Elizabeth II, as well as one of the world’s last remaining absolute monarchs.

The Sultan of Brunei is believed to be worth anything between $20 billion to $40 billion, and he spends a big chunk of that oil-produced money on indulgences, mostly of the motorized kind. He owns the world’s largest private car collection, counting over 7,000 items, the biggest Rolls-Royce collection in the world, and the world’s most expensive royal car, which also happens to be a Rolls-Royce – the Silver Spur II he decked in 24-karat gold for his wedding day. He owns an entire fleet of wide-bodied jumbo jets, and the most expensive private jet in the world. He owns the world’s largest family residence in the world, though that title has been disputed.

We could go on, but the bottom line is that “opulence” was probably invented in reference to the Sultan. A good example of that is the “Floating Palace,” the custom Boeing 747-400 he got a little over a decade ago, which remains unmatched in terms of cost and sheer outrageousness.

A new Boeing 747-400 is around $260 million today, but the Sultan reportedly paid between $100 million and $400 million for his when he bought it, depending on which report you believe. To this, he added another $120 million to customize it, which basically meant dressing everything up in gold plating, Lalique crystal, hardwood and custom carpets.

Since this is the private jet of a government official, not many specifics about it were made public. But those that were released paint a very clear picture: the jet is worthy of the name, offering incredible comfort and luxury to the Sultan and a large entourage. It has everything from a remote-controlled private office to a master bedroom with ensuite bathrooms, a formal dining room with custom tableware and glasses with removable sterling silver base, a conference room, and various lounge-like areas.

There must be something about dictators and absolute rulers of other denominations that makes them believe their poop is too valuable to go down a basic porcelain toilet bowl. A rose by any other name would be as sweet, Shakespeare believed, but only gold will do in this case. The same applies for the Sultan, so the bathrooms on his “Floating Palace” are either solid gold or gold plated, down to the fixtures and the washbasins.

Considering that the 747-400, which is an updated variant of the Boeing 747, can seat up to 416 passengers in a three-class layout, let’s just say that the Sultan has a piece of flying real estate. And it’s just one of his many aircraft, albeit the crown jewel: the Sultan also owns a Boeing 767-200, an Airbus A340-200, and at least two Sikorsky helicopters.

The video below shows the “Floating Palace” landing at the airport after a short test flight. It’s the closest any of us porcelain-toilet-bowl-pooping mortals will ever get to it. 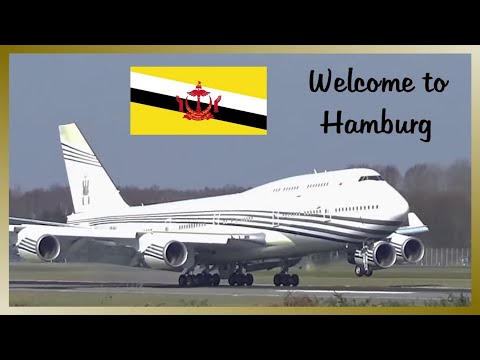