The MV Werften shipyard in Warnemunde, Germany, is where (cruise) dreams go to die. Global Dream II, one of the two aspiring-record-breaking cruise ships to be operated by Dream Cruises, will take its maiden voyage soon. Before it even completes construction. Directly to the scrapyard.
15 photos

In 2016, Genting Hong Kong ordered two new cruise liners, to be operated by Dream Cruises once completed. They would herald a new class of liners, the Global-class, and would rank among the world’s largest by size (second only to the Oasis-class from Royal Caribbean) and as number one in the world in terms of passenger capacity. They would also bring a series of other world firsts, including the world’s largest cinema at sea.

The gigantic, 343-meter (1,122-foot) Global Dream and sister ship Global Dream II would offer accommodation for over 9,000 guests and 2,200 crew, 208,000 GT of interior volume, and insane amenities, and each had a construction budget of $1.8 billion. Work on the first ship started in 2018, while Global Dream II began construction in 2019.

The latter is getting ready for its maiden voyage, but it will be far from the spectacular one imagined: as German publication An Bord notes, it will head directly to the scrapyard, where it will be sold piece by piece.

The massive vessel is in dry dock at the MV Werften shipyard in Warnemunde, Germany, with part of the hull already complete, machinery and basic systems installed. MV Werften filed for bankruptcy early in 2022, as did Genting Hong Kong and all the cruise liners it operated, including Dream Cruises. The cruise industry was among the hardest-hit in the 2020 international health crisis, and this is just an example.

Now, managers for the project are forced to cut their losses as quickly as possible, as the shipyard has to vacate the premises. This means Global Dream II has to leave dry dock, one way or the other. Since a buyer couldn’t be found, the machinery and fittings will be sold off as they are, while the hull will most likely be sold as scrap, the report notes.

Global Dream is in a somewhat better position, at least for the time being: the ship is in dry dock as well, but construction is 80% complete because work started earlier. Insolvency administrators hope the Global Dream will find a new owner and maybe operator, but the reality right now is that demand for cruise liners has dropped. 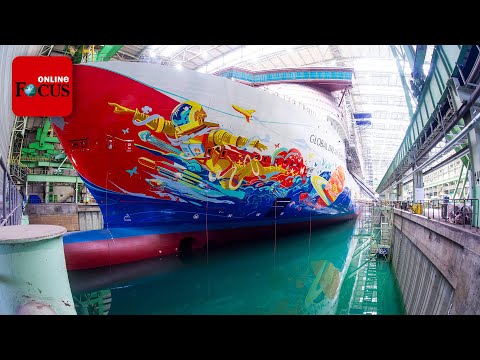 Editor's note: Photos in the gallery show an Oasis-class ship, Harmony of the Seas from Royal Caribbean.