5 Game-Changing Engine Made in the U.S. to Power Both Rockets and Hypersonic Aircraft
Up Next

Otilia Drăgan
It’s an innovative platform meant for advancing hypersonic research. It’s also the world’s largest aircraft in terms of wingspan. The Roc has just successfully completed another test flight in the series that started at the end of last year. It was its eighth test overall, but the first one that was conducted while also carrying the Talon-A autonomous, hypersonic separation vehicle.
8 photos

Strategically based in Mojave, California, Stratolaunch wants to make hypersonic flight testing more accessible and, therefore, more frequent. This would be achieved by launching small, rocket-powered vehicles that are also autonomous from an altitude of around 35,000 feet (10,668 meters). These would act as hypersonic testbeds, carried and launched with the help of the mammoth aircraft called Roc.

Roc has already successfully completed several flights, but the most recent one marks the first time it also carried a Talon-A vehicle. It’s called a “captive carry test flight,” and it took place over the Mojave Desert, with NASA livestreaming the event (you can watch it in the video below). According to Stratolaunch, the goal was to measure the aerodynamic loads on the Talon-A during Roc’s flight.

The 238-foot-long (72.5 meters) Roc is roughly the size of an American football field, boasting a distinctive-looking twin fuselage. It’s powered by six Pratt & Whitney PW406 turbine powerplants, with three mounted on the pylons under each wing. The Talon-A attaches to the aircraft’s central pylon, located between the two fuselages, Flying Magazine explains.

The massive Roc is meant to fly with several Talon-A vehicles attached to its belly and launch them on a single flight.

Tests will continue, with Stratolaunch aiming to start deliveries for the U.S. military and other customers by 2023. 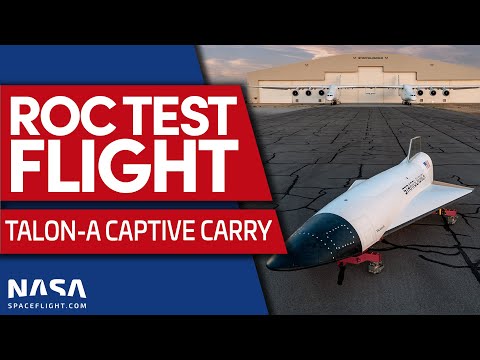