1 Researchers Sailed the Replica of a 2,000-Year-Old Ship to Solve Ancient Sailing Enigmas

4 Wind-Powered Oceanbird Is the Tallest Ship in the World, Can Carry 7,000 Cars

$52 Million Akira Is a Powerhouse Disguised as a Lavish Superyacht, Easily Hits 25 MPH

Home > News > Float and Dive
Otilia Drăgan
There was a lot of excitement at Newcastle port in Australia yesterday. Local port officials were eagerly waiting for the arrival of the Shofu Maru ship from Japan. This is not a regular coal carrier, but the first of its kind to use a modern wind-powered propulsion system in order to reduce toxic emissions. And this was its maiden voyage.
7 photos

Hybrid propulsion, LNG (liquefied natural gas), hydrogen, and even ammonia – these are some of the alternatives that could reduce shipping’s impact on the environment. The industry is working its way up to fewer toxic emissions by taking small steps.

On the other hand, modern systems based on what many consider the purest source of energy - wind power – have already been implemented as a solution for various types of commercial vessels and pleasure craft. But can this be used for massive cargo vessels also?

Shipping giant Mitsui OSK Lines is betting on that. Its latest creation, Shofu Maru, is a pioneering coal carrier equipped with a hard-sail wind power propulsion system. Big enough to transport more than 80,000 tons of coal, it uses both fuel and wind power to move.

The innovative Wind Challenger system harnesses the power of the wind with the help of a telescopic fiberglass sail that can extend up to 55 meters (180 feet).

On its trip from Japan to Australia, Shofu Maru was expected to cut fuel consumption by 5%, according to ABC News Australia. That may not seem like a lot, but it equals to 25,000 liters (6,605 gallons) of fuel. Considering that large cargo vessels such as this one burn hundreds of thousands of liters on these routes, this is a significant reduction.

In fact, the Wind Challenger could help reduce fuel consumption even by 8% on a route from Japan to the U.S., thanks to the more favorable wind conditions in the northern hemisphere.

Japanese and Australian officials have recently signed a cooperation agreement that includes actions for reaching the 2050 net-zero target, and the wind-powered Shofu Maru is ready to help them get there. 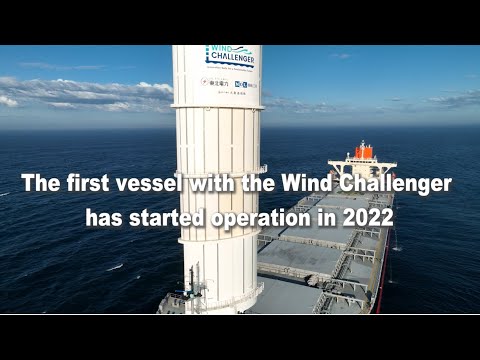