2 European Trefecta Could Be the Ultimate High Performance E-Bike

5 Kalkhoff Electric Bikes Now Available in the US
Car video reviews:
Up Next

What’s the biggest problem when it comes to commuting on a bicycle? Safety and the lack of the rider’s protection from bad weather, mainly. Well, there’s a comedian-turned-inventor that believes his three-wheel vehicle that uses serial hybrid pedal-EV technology to give you the feeling of superhuman strength could actually solve this. And no, he’s not joking.
1 photo
Currently under development, the Raht Racer is the brainchild of Rich Kronfeld from Minneapolis, a comedian who is also a great bike enthusiast. After successfully obtaining a governmental grant that backs up green technologies, he started working on a bicycle that could actually be used as a commuter. The inventor claims that one of the reasons people still prefer cars to bicycles is that the two wheelers simply can’t go fast enough.

Long story short, you pedal as you would an ordinary bike, but go as fast as a car. How? Well, by using a state of the art pedal-electric hybrid technology that basically amplifies pedal power, enabling the rider’s legs to propel the vehicle up to highway speeds. The current prototype is able to reach a top speed of roughly 70 mph yet its creators claim the development product will be able to reach the 100 mph mark.

Sure, but how can you say that reaching these speeds on a bike can ever be safe? Well, Raht Racer is allegedly safer then a motorcycle or a bicycle on a busy street because of how it was designed. It’s integrated roll cage, reinforced carbon fiber body and automotive safety features like headlights, tail lights, seat belts and even an air bag should all keep things nice and clean.

In raw specs, we’re looking at a three-wheeler weighting 570 lbs, propelled by a 20KW motor which gets its e-juice out of a 9.2Kwh Li-Ion battery. With an approximate 50 miles range, the Raht Racer should cost somewhere between $35,000 to $45,000 which is quite a lot of money. But it is an vehicle designed for the bicycle enthusiasts after all, so it might just be worth it, this of course only if it’s going to reach the $75,000 goal set via Kickstarter.

We’ll let you be the judge. 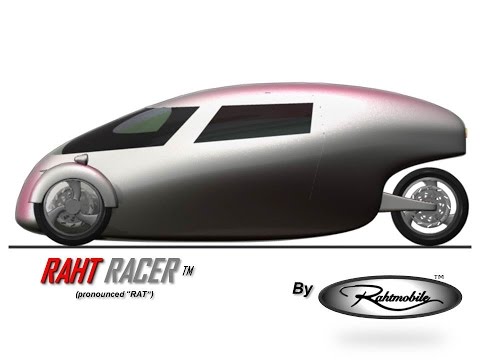