2 No Tesla Cybertruck from LEGO, Despite Massive Fan Support

3 The Tesla Semi Is the Perfect Luxury RV: The Semi-Home Concept

Home > News > Editorial
Elena Gorgan
Whether you believe what the Tesla fans are saying that Elon Musk is saving the world, or are skeptic about the whole electric revolution, there can be no denying: Tesla has massive appeal across all generations.
Much like Apple, to which Tesla is often compared, the Elon Musk-fronted company is considered at the forefront of the electric revolution, hailing in the age of tomorrow. And the fact is that whatever Tesla does, Tesla does good, in the sense that people will be buying into the Tesla narrative and the actual Tesla products no matter what.

October is autoevolution’s Tesla Month and, in honor of the carmaker, here’s a little something to prove the kind of appeal the Tesla brand holds for folk. Here is the “world’s first Cyberbike.”

No, the Cyberbike is not an actual Tesla product and no, it’s not even an actual product. It is, however, a Tesla-inspired bike, one that popular YouTuber, vlogger and former filmmaker Casey Neistat from Connecticut had built for his personal use back in February of this year. If Neistat’s name doesn’t ring a bell, know that he often features technology-centered content and that his videos top 1 billion views.

Earlier this year, Neistat teamed up with Super73 to test out a prototype of one of their upcoming electric bikes – seemingly, the R-Series, which comes with dual suspension, an optional offroad kit and generous 960 watt-hour battery for an estimated 75+-mile (120+-km) range. This was his second collaboration with the bike maker but, this time, they made it all the more special.

Because the product wasn’t out yet and the bike maker wanted Neistat to try it out without having people see it, they came up with the idea of putting some sort of faux body over the actual bike. From there, the idea grew into creating a Cybertruck-inspired bike, which Neistat then dubbed the Cyberbike.

A team from Super73 first cut the body out of cardboard and found ways to have it sit on top of the prototype in such a way as to hide it from view, while it remained fully functional. Well, almost fully functional, as Neistat got to find out on his own. Once this was achieved, they built a different body from aluminum sheets welded together.

The build was crude and looked the part, with the handles coming out of what would be the windows of the Cybertruck and the bed of the truck being a small plastic tray that came off easily, but was still able to hold a six-pack. Braking was difficult, turning nearly impossible because the wheel kept rubbing onto the fake aluminum body, and Neistat had to ride on torque only because they had to pull out the pedals. As such, his feet rested on what looked like passenger pegs attached to the rear wheel.

Again, the conversion was crude, but it served its main purpose: it hid the body of the prototype bike from the eyes of the world. In the process, it also proved that you could probably sell even the most craptastic piece of machinery as long as it looked like it was a Tesla product.

If you have the time to check out the video at the bottom of the page, a sort of documentary of Neistat testing the prototype, you will see the kind of reactions he got while out on the town. Even assuming that footage with negative reactions was cut in editing (which it probably was), those people are overly enthusiastic about an electric motorcycle clad in the fakest aluminum body imaginable.

This isn’t mean to discredit Tesla in any way or poke fun at its gazillion supporters / fans / customers, but rather to point out an interesting fact: when people say there’s a cult-like vibe to all things Tesla, this is probably what they mean. People will buy anything (into) anything that looks like a Tesla, even if it’s such a visibly terrible build like this one. 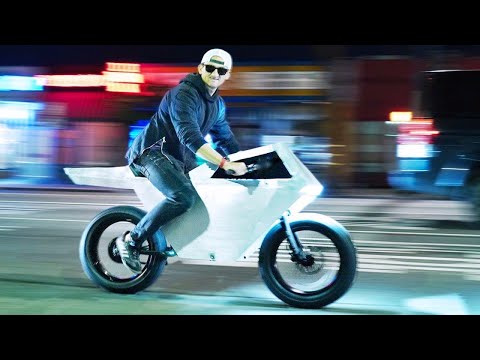