5 This eVTOL Claims to Be Better Than a Helicopter, and Quieter Too. Has a Range Of 3 Hours
Car video reviews:
Up Next

World's Most Fuel-Efficient Unmanned Cargo Airplane Can Carry 770 Lb for Over 1,500 Miles

Bulgarian manufacturer Dronamics teased its Black Swan for quite a while now, and yesterday (December 7), it finally introduced it to the world, despite the unsupportive snowy weather. The big event took place at the Sofia Airport in Bulgaria, where the company finally had the chance to flaunt its advanced aircraft, after six years in development.

The Black Swan is described as a new type of airplane that is small, unmanned, and extremely fuel-efficient. Dronamics boasts of the cargo aircraft being able to transport an insane payload of up to 350 kg (771 lb) over a distance of up to 2,500 km (1,553 miles) for a cost that is more than 50 percent lower than with other airplanes.

Designed to be able to land on short (400 meters/1,312 ft) and unpaved runways, the Black Swan can quickly deliver packages to even the most remote locations.

Its automated flight control system allows operators to monitor and manage the drone remotely via satellite.

Dronamics CEO Svilen Rangelov and CTO Konstantin Rangelov claim the Black Swan will change commerce, and the company plans to build an entire fleet of these drones to serve the entire world.

The aircraft is just one part of the ecosystem, as the Bulgarian manufacturer plans to create a global network of drone ports, along with a ground control station that is required to guide all the UAVs.

Dronamics hopes to start flights early next year, first in Europe, followed by Australia, and then other countries. You can watch the unveiling event of the Black Swan below and feel free to skip to minute 9:00 in the video. 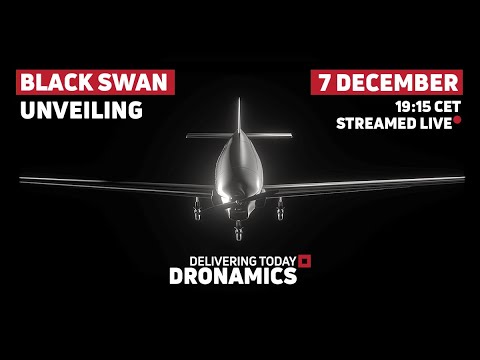