1 Harley-Davidson Pink Label Collection Is Here for Great Cause

4 Woman Survives Breast Cancer, Turns 1974 Stingray in a Tribute for Those Still Fighting
Car video reviews:
Up Next

Tesla Autopilot Detects an Accident Before It Happens

World's Largest Tire Mark Was Made For Breast Cancer Awareness

The Al Jazirah Ford Racing team of Saudi Arabia has made the world’s largest tire mark image ever created.
9 photos

The accomplishment was done as part of a larger campaign that was imagined to raise awareness about breast cancer, which is why the tires they used made pink smoke.

Both Ford Mustang RTR drift vehicles had pink bow ties on their rear windows for the same reason. In case you have not guessed it by now, a pink bow tie is an international sign for breast cancer awareness.

The two Mustangs were driven by professional race drivers Abdulhadi Al-Qahtani and Muath Al-Essa, both part of the Al Jazirah Ford Racing Team. Guinness World Records representatives were present to homologate the feat at their storage center in Riyadh, Saudi Arabia. Alan Pixsley, a Guinness World Records adjudicator, confirmed the new record, and he presented the two drivers with an official certificate.

The image that was made to signify the breast cancer awareness ribbon measured a massive 883,98 square meters, which is the equivalent of 9,515 square feet. It took the drivers 45 minutes to complete the image, but the Ford Mustang RTR-Ds completed the task without breaking a sweat.

It is worth noting that the record could have been broken if the drivers would have drifted in an area of only 500 square meters. The Saudi Arabian drivers felt they could easily exceed that value, so they performed the stunt in a sector that added up to 883,98 square meters.

October is the National Breast Cancer Awareness Month in the USA, but this record attempt was made in December in Saudi Arabia. Regardless of the month when this gesture was fulfilled, its role is more important than its timing.

Just like any other campaign, the goal of this project is to let people know that breast cancer exists, and that women die if it does not get detected and treated on time. Feel free to find a local organization that supports those who have cancer in any form and donate to aid their efforts. 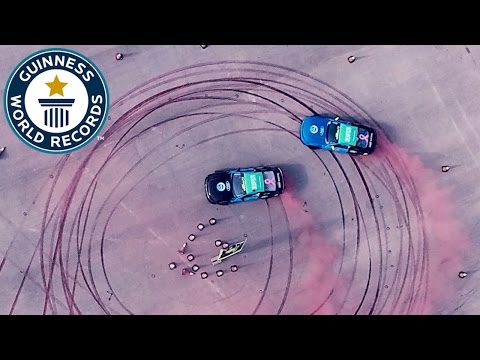