1 A Camper With a View, the Panorama Shelter Blends With Style in Dutch Landscapes

4 This Trench Transforms Into a One-Man Tent, Is Perfect for Emergency Situations

Rooftop tents are a dime a dozen, but it’s not every day that you come across a model that brings something new to the table. The Expedition Dream Sustained (TEDS) company claims it has come up with the world’s first and largest pop-up dual expandable rooftop tent, perfect for camping trips.
7 photos

The “world’s first” marketing strategy is all too common nowadays among manufacturers of all kinds, and while we’re not convinced that TEDS claim is 100 percent accurate, we were indeed impressed with its TEDPoP hard shell tent.

The tent has a compact design while offering a large interior space that can sleep up to five people, according to the company’s claims. It has a hard shell construction and you can easily set it up by just lifting the cover and unfolding the expandable panels on the left and right. TEDPoP has gas-strut bars at the corners that automatically open up the hard shell.

Once fully expanded, the tent creates a large 73 x 83 in (185 x 211 cm) sleeping space and a non-obstructed 360-degree view. It has two entrances with ladders and windows on all sides, including a ceiling one that allows for unhampered stargazing.

The TEDPoP rooftop tent is highly breathable as well as UV proof and waterproof, thanks to its canvas fabric and fly material. The high-density canvas with maximized insulation drastically reduces condensation, which is one of the biggest annoyances with ordinary tents.

The tent is currently the subject of a Kickstarter campaign but it’s already reached its $20,000 goal. The tent has raised almost $230,000 so far, with 19 more days to go. 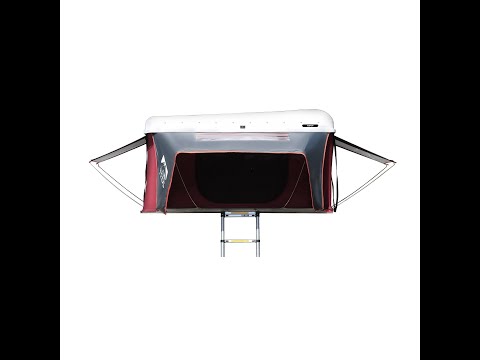