1 Retro-Futuristic ZID Two-Wheeler Claims To Be an Electric Scooter, Looks Nothing Like One

3 DarkKnight Cyberfold E-Scooter Is the Two-Wheeled Version of the Batmobile, Can Hit 62 MPH

Estonian-made Aike T electric scooter is one sleek-looking wheeler that claims to offer more than just an appealing design. Its manufacturer boasts of being the first and only USB-C rechargeable e-scooter in the world.
11 photos

As fun and convenient as e-scooters are, a lot of them are poorly made, which means they are not reliable in the long run. Aike was founded to fix that problem and to set new standards for the urban commute. The European company is anything but modest when it comes to its products, touting its scooters as the wildest and most sustainable in the world. Aike launched its first model in 2021 and now is back with the Aike T, the world’s first electric scooter that can be charged via USB-C.

Aike T is an eye-catcher and things get even better when you step foot on its wide, comfy deck. It looks sturdy and “uber strong” to quote the manufacturer, which describes the scooter as the new unbreakable kid on the block, comparing it to old Nokia phones. In addition to flaunting a solid construction, the Aike T is also designed to be practical in the city, featuring a folding design. The two-wheeler weighs 19 kg (41.8 lb), is equipped with 10” tubeless pneumatic tires, and features both electric and mechanical brakes. It can handle a payload of up to 150 kg (330 lb).

With its 350W motor, Aike T can hit a top speed of 25 kph (15.5 mph), while the removable, 583.2 Wh offers ranges of up to 40 km (approximately 25 miles) per charge. An additional, built-in IoT (internet of things) battery with a smaller capacity ensures that your scooter is still GPS protected even when the main battery is removed. The theft protection comes with an alarm and notifications that are sent to your phone in case anyone messes with your scooter.

The mobile app included with the Aike T also offers other features in addition to GPS tracking. It lets you control the wheeler’s regenerative braking intensity, its speed, it locks/unlocks the vehicle and more. 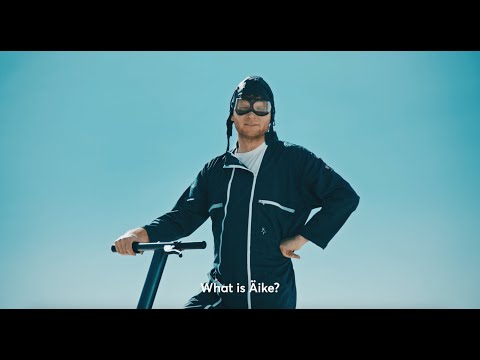