2 Ocean Drone Captures Stunning Video Inside a Hurricane, for the First Time Ever

4 Meet the Drone Delivery Capital of the World, Where Your Cup of Joe Comes From the Sky

5 One of the Largest Retailers in the U.S. Turns to Drone Delivery
Car video reviews:
Up Next

Wing launched what it claims to be the world’s first rooftop drone delivery service. Wing is a subsidiary of Alphabet Inc. and operates in Australia, the United States, and Finland. It specializes in autonomous delivery services by drone and its latest collaboration is with retail group Vicinity Centres.
6 photos

The two companies partnered up to launch what they claim to be a new model, a drone delivery service from the rooftop of a shopping center. According to Wing, this type of service brings several advantages, with one of them being the fact that it doesn’t require additional costs in infrastructure because it uses the underutilized rooftop space already available.

Wing has made more than 2,500 contactless deliveries so far via its rooftop delivery service, with customers in the Logan area ordering smoothies, rolls, bubble tea, to offer just a few examples. The company plans to expand its list of available products to pharmaceuticals, beauty, and personal care products, and more.

There’s a lot of faith in drone delivery services with Wing estimating that by 2030, drones could deliver up to 6 percent of all household purchases, which would lead to a growth in retail sales in Australia by $2.2 billion.

This is not the first time Logan has made the headlines, with the Australian city being recently named the drone delivery capital of the world. Wing has been operating in the city since 2019, making over 50,000 deliveries by drone in the area, with 10,000 of them being cups of coffee in the past year alone. Wing also says that on average, a Logan resident received a drone delivery once every 30 seconds, during the company’s service hours.

The drones used by Wing can fly at a top speed of 68 mph (110 kph) and cruising altitudes of approximately 130 ft (40 m). When they reach the customer’s destination, they descend to a height of 23 ft (7 m), lower a tether, and automatically release the package. 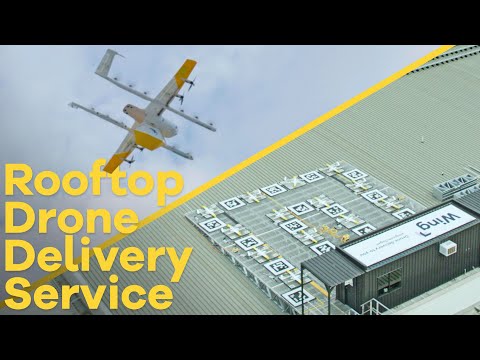