Announced four years ago as the first electric and self-propelled container ship, Yara Birkeland recently had its maiden voyage to the capital of Norway.
6 photos

The autonomous vessel was designed to transport mineral fertilizer for Yara, a Norway-based chemical production company, and was developed in partnership with Kongsberg, a marine technology firm. It is meant to replace 40,000 trips by diesel-powered trucks per year, cutting down 1,000 tons of CO2 emissions.

For its maiden voyage, Yara Birkeland cruised from Horten to Oslo, with the latter being the capital of Norway. It was a journey of about 43 miles (70 km) and it took place on November 18th. The next phase is for the vessel to begin the two-year testing period of its self-propelling technology and then to be certified as an all-electric, autonomous container ship.

As explained by Svein Tore Holsether, Yara CEO, the vessel will be used to transport the fertilizer across Norway, from Porsgrunn to Brevik, and is meant as an example of green transition in practice and the start of a new type of emission-free container ship. This high-tech solution would be beneficial in a lot of places around the globe, where road traffic is congested.

And while Yara Birkeland claimed the spot for the world’s first all-electric, self-propelled cargo ship, another premiere took place just over a month ago, also in Europe. It was when Sea Machines’ Nellie Bly vessel completed the world’s first 1,000+ nautical miles autonomous and remotely commanded journey. The voyage began and ended in Hamburg, Germany, with over a dozen ports being visited along the way, in what was called the Machine Odyssey. 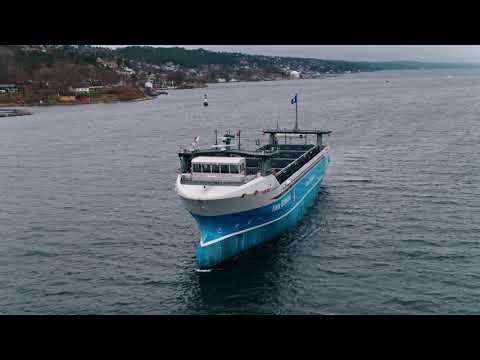