Cosmin Vasile
Wargaming’s World of Warships is getting its third Transformers collaboration today, along with a new map, weather effects, big improvements with HD textures, firing, explosions, and more. Also, the Convoy battle mode makes a comeback, probably for a limited time.
9 photos

Update 0.11.5 is now live for World of Warships players, so here are some of the most important additions to the game. First off, the new Faroe Islands map is available in World of Warships as part of the new update. It’s been selected as the next playable location by players in Autumn 2021, and it’s designed for Tier VII-X ships and superships.

A boatload of visual changes is coming to the game, too, starting with graphics improvements for US destroyer models. A number of these ships, present since the release of the game, have received a major revamp. Mahan, Benson, Fletcher, and Gearing will all be dramatically upgraded, including slight changes to their physical parameters and balance characteristics.

Of course, the broader gameplay features of these ships will remain the same. Wargaming also confirmed that the next update, 0.11.6, will expand these visual upgrades to even more US ships, including models of Sampson, Wickes, Clemson, Nicholas, Farragut, and Sims.

As mentioned earlier, the Convoy battle mode, which was debuted with update 0.10.8, is making a comeback. This battle type is fought in teams of 12 with Tier VIII-X ships, as two randomly distributed teams will take part in an attack-and-defend battle across one of six different maps.

Last but not least, Wargaming’s partnership with Hasbro is bringing World of Warships players the third Transformer collaboration, which consists of new Transformers-themed skins. These special camouflages were originally released only on World of Warships Legend but they’re now available for PC too.

Some of the Transformers-themed skins added to the game today include Iowa’s Freedom Fighter skin, Bismarck’s Messenger of Oblivion skin, and many more. These will only be available during this specific update. 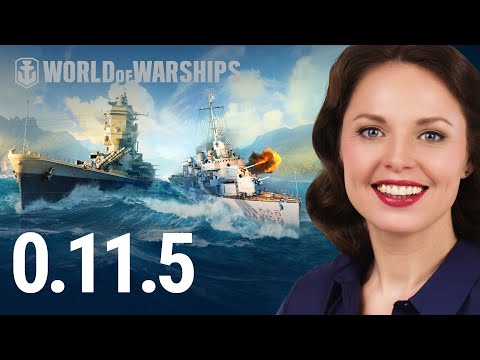