Cosmin Vasile
One of the biggest naval MMOs, World of Warships, is getting its usual content-packed update this month. This time around, pilots will be able to captain a new fleet of French cruisers and experience a new crossover event with Azur Lane as part of a partnership with the popular mobile game and anime.
8 photos

The three new French cruisers that are making their debut appearance in this update are the Tier VIII Cherbourg, Tier IX Brest, and Tier X Marseille, all featuring large-caliber guns and deadly close-range firepower.

The new French cruisers are known for their large-caliber guns for their class mounted on the bow. Despite the fact that reloading is very slow on these ships, this is compensated for by the Main Battery Reload Booster consumable.

Also, the new ships are capable of achieving high speeds with the help of the improved “French-specific” Engine Boost consumable. The ships' armor does a great job in protecting their citadels against medium-caliber AP shells, but the new cruisers are quite vulnerable against HE and SAP shells.

Wargaming revealed that while medium and long ranges are optimal for engagements, with the help of their 139 mm secondary battery guns with improved accuracy, the new ships can also show their worth in close-range encounters.

Update 0.11.4 also adds Italian destroyers to the Tech Tree, so World of Warships players can now research the full branch of these ships. Not to mention that the update brings new seasons of Ranked and Clan Battles, including the Arms Race games mode in Random and Co-op battles, which returns to the game this month.

Finally, starting May 27, Azur Lane returns to the high seas, as players will be able to collect ship camouflages for the Iowa, Indomitable, and Shokaku, alongside 6 new commanders, including the iconic Bismarck and New Jersey, as well as commemorative flags. Additionally, AL Aurora and AL Azuma will expand the roster of Azur Lane ships in the game. 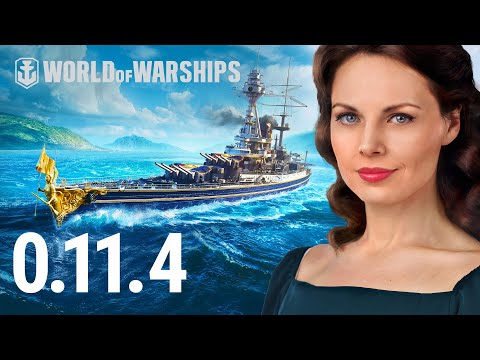