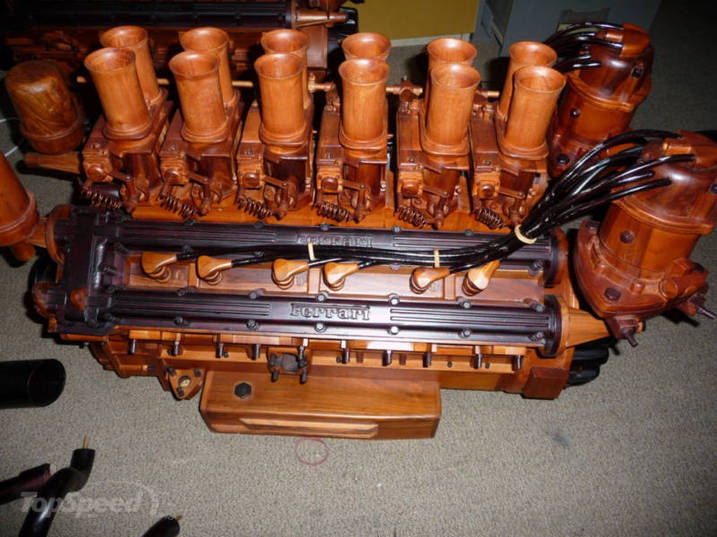 We have always wondered why people collect useless stuff they don't really need. What is the use of cluttering your house with coins you don’t spend and stamps you don’t stick on envelopes? Does that give you a good feeling or is it just an addiction?

This very special Ferrari engine has made us realize the value of a collectible. “What is so special about it?”, you may ask. Well, it was build entirely out of wood, from the crank-case to the carburetors.

As most scholars agree that the definition of art is an object of beauty that has no purpose whatsoever, this can be described as art. If you want this wooden Ferrari V12 Engine, you should move fast, as the Ebay auction for it is coming to an end in four days. The creation took 400 working hours to build and should fetch a hefty price, as it comes with a huge level of attention to details.

The engine is an exact replica of the V12 in the Ferrari V12 354 GTB in true scale. Bill Dietz, the builder of the replica, claims that he has produced 12 such wooden powerplants over a period of 3 years, using photos and an actual Daytona engine as reference. Weighing in at 50 lbs, the motors are built out of expensive woods such as mahogany, teak, hawaii koa, walnut, oak and maple.

It is quite expensive, though if we owned 6 Ferraris and had an awesome garage, this might be a nice feature to show off with... $6000 would be a sneeze in a tissue at that level.