5 Mustang and Supra Battle for 6-Second Drag Supremacy, What's Your Favorite?
Car video reviews:
Up Next

It’s not uncommon to see all sorts of creatures emerge from the sea - and some of them easily qualify as being newsworthy. They’re usually from the animal kingdom, but every now and then, a representative of the automotive industry takes a dip to bridge the gap between land- and water-based vehicles.
12 photos

We have seen instances when a Chevrolet Colorado turned into an eight-wheel sea-faring creature of some sorts, or even all-electric SUVs get their name from the ocean to support a startup’s intrepid imagination.

But a very old beat-down Ford truck coming out of the ocean as slowly as a 200-year-old giant turtle is clearly something else. Sure, we have seen the Blue Oval bet a fortune on rock crawling models, but it’s probably the first time we’re witnessing a Ford take up the battle with the naturally occurring minerals no matter what!

Especially since the said geological formations were probably deemed pretty safe from automotive interference, as they dwelled on a stretch of beach in Las Grutas, a resort located in the Argentine province of Río Negro, at the northern edge of Patagonia.

Anyways, we don’t have a lot of context behind the story that was recently shared by the ViralHog channel on YouTube. According to the description, some locals were on site to help rescue a Toyota Hilux that got stuck in the sand (!) when all of a sudden, everyone dropped their jaws at the sight of this mythical creature coming out of the sea.

Even though seeing any sort of vehicle crawl out of the ocean is enough to stop anyone in its tracks, this was a lot more shocking given the advanced state of decay of the vintage Ford truck.

There’s no grille, no hood, and the slow arrival was seemingly owed to a huge load of wood making it look as if someone did a very poor job of turning it into a bagged lowrider. 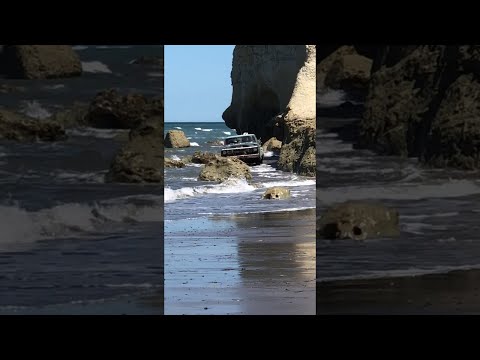