5 Kia's Next Super Bowl Spot Features Cutest Robo Dog Anyone Has Ever Seen
Car video reviews:
Up Next

Have you ever driven along and suddenly felt like you took a wrong turn and ended up in one of those "bad" neighborhoods? That's precisely what's going on in this Skoda commercial that aired in Europe and the U.K. some years ago. Why shed light on a car commercial from back in 2013? Well, aside from being Commercials Month here on autoevolution...just watch the dang thing!

Folks, this may be one of the quirkiest and fun car commercials I've witnessed in quite some time, and frankly, I never knew that Skoda had this creative of a team behind their marketing. It's so dang good that it made me look up the car this flick is for – the Octavia vRS – and even caused me to write this article.

Well, the video starts with a scene of a rather bulky gentleman picking up his morning newspaper; nothing out of the ordinary so far. It also looks like a rather posh neighborhood too, with paved driveways, garages, large homes, and generally cared for grass. And then things start to slowly get weird, in a way that maybe you didn't notice subconsciously.

Suddenly you see two women exercising with what appear to be some of the biggest dumbbells I've ever tried to lift. They make things look like a breeze, not even breaking a sweat in the process. As for the next scene, things start to take a somewhat maddening turn; a guy is mowing his lawn with a beefed-up lawnmower with an 18-wheeler exhaust coming out of it. Scenes cut to another guy cooking on a massive grill which, mind you, is powered by a friggin jet turbine. Things aren't right in this neighborhood.

As the scenes keep rolling, we aren't shown the Octavia. Instead, we see a kid riding the most massive tricycle I've ever seen, a lady lounging with a cocktail drink she could literally fit her head into, and that's when we see the first hint of the Octavia, but nothing more than a shot of the left front wheel.

As the driver cruises around this tricked-out and thuggish neighborhood, we spot a massive ice cream truck lifted above huge monster truck tires with an ice cream man serving up the cones half the size of the kids eating them. But what about the baby stroller with oversized dubs? What about it? All seems in the day's business for this 'hood.

Yet, no matter the wild world the Octavia is rolling through, everyone seems to be in shock and awe at the Skoda. I don't care much for this brand, even though it carries a rather sizeable history, but everyone in this neighborhood seems to be dropping all they're doing just to get a taste of the vehicle. The driver, looking as confident as ever, drives on. Personally, I'd be the first to ride the massive tricycle, try out that jackhammer with seven spikes, and ask that young girl where she got her Arnie-like teddy bear.

Nonetheless, the idea portrayed in the video is a rather neat one. Skoda wanted us to get a feeling for the vRS by simply dropping it into the most pimped and tricked-out neighborhood they could find (create) and seeing people's reactions. I particularly enjoyed the resident walking a dog as large as him and the homeowner showering her lawn with a firefighting hose, but my personal favorite is that buff teddy bear.

What sort of message was Skoda trying to send out to future owners? I think it's relatively simple if you ask me: no matter how cool of a neighborhood or how commonplace amazing machines and vehicles may be for its residents, the Octavia vRS is still a sight to behold. Well, I feel it's all about preference here, but the vehicle still boasts some impressive stats.

Now, it's been years since that commercial, and after taking a look at the Skoda U.K. website, I noticed something peculiar - this vehicle has basically maintained the stats mentioned above, with the only difference being one extra mile added to the top speed, for the gasoline engine anyway. Other vRS engine options exist, so take the time to explore them if the commercial you just witnessed works its magic. I feel we need more of these fun and witty commercials in our lives; thank god for Commercials Month. 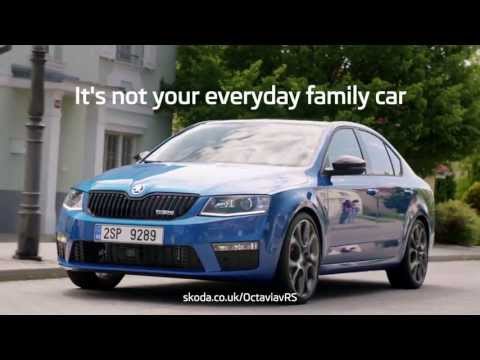