1 Part UTV, Part Jet Ski, the Typhoon Might Just Give Birth to a New Powersports Segment

2 Lance Stephenson's Having the Most Fun on a Jetcar Speedboat, Calls It a "Lam Water Boat"

3 This New Mini Speedboat Promises to Be as Thrilling as a Jet Ski, With Added Benefits

4 This Aqua-Corvette Is Part Jet Ski, Part Boat, And All About Fun

5 Pennsylvania Man Takes Jet Ski for a Highway Ride, Is Pulled Over by the Police
Car video reviews:
Up Next

If I had a dollar for every time a manufacturer said that their product is the best on the market, I would write this article in the backseat of a Rolls-Royce. However, when it comes to the new Ultra 310X, Kawasaki has every right to call it the best performance jet ski available today.

Originally called water scooters, personal watercraft or PWCs have been around since the mid-1950s when the 200cc, propeller-driven Vincent Amanda and the German Wave Roller were introduced. Other manufacturers joined in on the fun, but it wasn’t until the early-1970s that these vehicles became truly popular.

The company behind this sudden surge in popularity was none other than Kawasaki and the model that made it all happen was called Jet Ski. In the decades that followed, PWCs have become known as jet skis and Kawasaki remained at the forefront of their evolution.

In recent years, the Japanese company’s most popular jet ski series has become the Ultra, which many argue is the best range of PWCs on the market. For 2021, the lineup was set to receive a major overhaul. which unfortunately had to be postponed due to supply shortages.

It eventually hit the water this year (2022) and it proved to be so good that the company will carry it over into the 2023 model year. While the Ultra series features three distinct models, we (along with many PWC enthusiasts) think that the best value-for-money choice of them all is the 310X.

In general, taking something really, really good and attempting to make it better often backfires, so when Kawasaki announced that it was redesigning the 310X along with the entire Ultra, many fans were anxious.

The renowned deep-V hull was left untouched, mainly because its design was more or less perfect. The same can be said about the 1,498-cc supercharged four-cylinder, which was already the most powerful engine available on a production jet ski.

So, instead of messing with the good stuff, Kawasaki went ahead and improved the watercraft’s real shortcomings.

The first thing they did was redesign the deck, lowering the 310X’s center of gravity by positioning the new three-person seat 1.3 inches (33 mm) and narrowing it by 3.1 inches in the knee area. Above the knees, the old glovebox was removed, and instead, two smaller ones were integrated under the handlebars. Combined, they offer 10.6 gallons (40.1 liters) of storage. Additionally, the right compartment gained a separate waterproof box that can be used to store valuables or charge a smartphone thanks to the optional USB port.

The area above the gloveboxes now houses two cupholders and in between, there’s a new 7-inch wide TFT screen that can be controlled via a waterproof knob and two confirmation buttons. It displays all the relevant information that you would need, as well as the new power modes (full, middle, and low) or the launch control setting.

The handlebar features redesigned, waterproof buttons that are ergonomically positioned, and on the right side, opposite to the throttle control, you’ll notice a new level marked R. This controls another brand-new and long overdue feature called Kawasaki Smart Reverse with Deceleration, or KSRD, for short. In simpler terms, this novel system controls braking and allows the jet ski to go backward. The way it functions is quite different from what you would find in competing models, so it might require a bit of getting used to, but it’s still extremely ergonomic and works really well.

Like the previous models, the new 310X comes with another, bigger storage compartment upfront. Unfortunately, Kawasaki narrowed its opening, which makes it difficult to get a backpack in, while fitting a helmet inside this compartment is now out of the question. This is actually the only thing that we can complain about, as the rest of the upgrades are spot on.

Another terrific upgrade worth mentioning is the redesigned footwells. Wider and deeper, they complement the lower deck to lower the riding position and in turn lower the overall center of gravity, which makes the 310X even more maneuverable.

At the end of the day, if you’re looking for a top-notch performance sky jet, power and maneuverability through choppy waters are key. With a legendary hull design, a lowered deck, and a supercharged four that make 310 ponies, the Ultra 310X borders perfection like no other PWC out there.

But hey, don’t just take my word for it, check out the positive reviews online or just go ahead and ride one. If you’re a beginner, you’ll be blown away by its raw power while if you’re a seasoned pro, you’ll struggle to find something wrong with this incredible jet ski.

Pricing for this model starts at $17,999 (without taxes or destination fees), which is not cheap by any means. However, if you’re looking for the best performance PWC available, it’s money well spent.

The Ultra lineup also includes the 310LX-S and 310LX, which come with more features but also a heftier price tag. If raw performance is what you’re after, the 310X is by far the best buy. 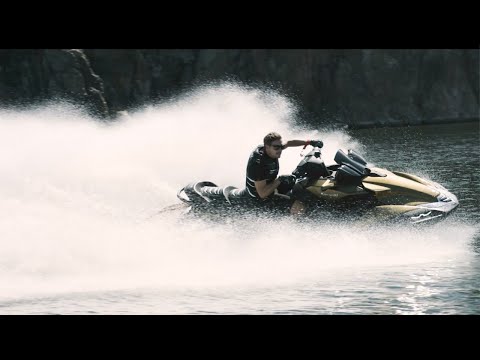