3 History of the Chevrolet Corvette, the Greatest American Sports Car of All Time

With a Rebuilt Original Engine, This Corvette Is Looking for a New Driver, Not Just Owner

This is clearly a car that has seen many miles on the road, and after a rebuilt engine and transmission, it is now up for sale, looking for someone to add more miles on the 10k-mile odometer.
11 photos

Chevrolet introduced the second generation of the Corvette in 1963, and it sparked animosities between Duntov and Mitchell, mostly because of the rear window. The former didn't agree with the split-window system, raising safety-related concerns. At the same time, the second believed it looked better this way. In the end, logic prevailed, and starting with 1964, the rear window was made in one piece.

The model you see here left the assembly lines on March 31, 1964. It was the year when Corvette started to be more appealing to customers. Yet, only a mere over 8,000 coupes were sold, while the big part of the production was reserved for the convertible version. Also, this car sports the fuel-injected powerplant (Fuelie) that was not as appreciated by those time customers who preferred the carburetors.

With its black exterior over black interior, this C2 went through a complete makeover for the engine. The dyno sheet shows that it has plenty of oomph under the hood. The 327/375 V8 fuel-injected engine provides 407.5 hp, even though in 1964 it was declared with 375 hp. It is mated to a four-speed manual and sends the power via a positronic rear end to the rear wheels. It surely can put a nice grim on the owner's face.

The car spent most of its life in the sunny California state, yet it traveled a lot, and some surface rust may be seen under the car. But, of course, the fiber-glass reinforced bodywork can't suffer from that. The NAPA68 seller states that the car was painted twice but in the same original Tuxedo Black (900) color, yet it could use a refresh. But, if you want to see the car live, you'll have to go to Wisconsin since it is there. It comes with black California plates and a clean title. But even though the car didn't get too much attention yet, worth knowing that a similar vehicle, just red, was sold in January for $341,000 and some change.

But this is no garage-queen; it is a car that fulfilled its meaning of transportation and pleasure-giver to its owners for the last half of century. And, of course, it is ready to trade hands when the auction ends on February 22 on Bring a Trailer website. 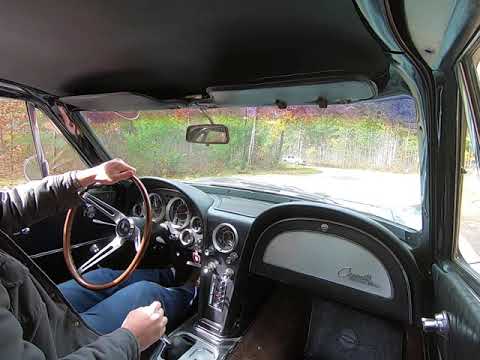