5 Hydrogen-Electric Aircraft Gearing Up for Regional Flights in the Next Years
Car video reviews:
Up Next

If you think your neighbor’s backyard floral arrangements are a bit too much, Dean Smith is the very definition of extra. The care assistant owns the cockpit of Bin Laden and Richard Burton’s private jet, and he’s turned it into some kind of garden shed slash rolling museum, permanently on display in his backyard.

Dean Smith is a 45-year-old care assistant who lives with his partner in Porthcawl, South Wales, in Great Britain. Their home’s backyard is typically tiny, but it’s also very special, since it doubles as the permanent display place for a fully-renovated Hawker Siddeley 125 Dominie cockpit. In an interview from earlier this month (see the video below), Smith calls it their very own and very special “garden shed.”

To be sure, this isn’t a garden shed, though Smith is often larking around in it, drinking beer and pretending to fly. This cockpit of the former twinjet business jet slash RAF navigation trainer, which formally goes by the name Winnie, is a rolling museum and an education tool, as well as a collectible worth way more than the £5,000 ($6,520 at the current exchange rate) Smith paid for it a few years ago. Winnie is also a celebrity, having traveled the country and attended more cockpit-fests and aircraft events than Smith could count.

Smith grew up with family members serving in the Royal Air Force (RAF) and, ever since he was a kid, he was passionate about collecting WWII memorabilia, whether it was shell cases or RAF military caps. As an adult, his collection grew, as also did his passion for aircraft.

In 2017, as he was considering buying an old airplane to see if he could try to restore it, he learned that the Doncaster Aviation Museum was selling the cockpit of a 1960s Hawker Dominie. He called them up and offered them £5,000 for it, which they accepted. Now, the hardest part was finding a trailer that could haul the 3-ton nose from its location back to his own home.

Smith did it with help from a friend (as one does) and a trailer they fabricated together. It did break down after just two hours on the road, but the nose arrived at his home in one piece. Smith and his partner had to tear down a garden wall and to bring the cockpit inside the garden themselves. Ever the funny guy, Smith would say in 2018 that he lost about 4 pounds (1.8 kg) just from the effort.

He named the nose Winnie, and set out to transform it into a rolling museum. It would have been a shame to repurpose it, since this is the same aircraft that once belonged to Saudi billionaire Mohammed Bin Awad Bin Laden, Osama Bin Laden’s father, and was used by Richard Burton and Elizabeth Taylor to travel the world. It was both infamous and famous by association, in addition to being a historic piece.

Over the lockdown, Smith and his partner were able to make Winnie as period-correct as they could. As he says in the video below, Winnie now has working lights and radio, period-correct gauges and buttons, and even white noise to replicate the experience of flying. Even the smell is the right one, and there’s a Winnie the Pooh recovered from under the flooring, which he believes belonged to the Bin Ladens. At one point, he thought about making the nose shake slightly to further augment the impression of flying, but that didn’t pan out.

Smith says that he keeps Winnie sheltered, but he brings it out every day to check stuff and, more often than not, to fix things that have stopped working. On his personal time, he considers it a toy of some sort, one he likes to tinker and spend time around. However, Winnie serves a much higher purpose: it helps educate both kids and adults on a vintage aircraft, and it does so in a context unlike a museum.

Visitors can touch everything and play with the controls, which they wouldn’t be allowed in a proper museum, Smith says. “I didn't want a flight simulator. I wanted an original aircraft so that kids entering the aircraft feel like they'll be in a real aircraft,” he once explained.

Sure, some people might think he’s crazy for storing an airplane nose in his garden and spending this much money on it. But it beats spending money on football matches, Smith believes. 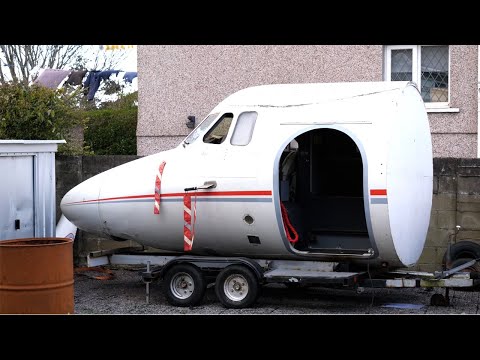