Wing Breakers Is a Combat Air Racer with a Weird Twist

Home > News > Videogames
Cosmin Vasile
I’m not sure how many remember Altitude0, an arcade plane racing game launched on PC back in 2014, but developer Gugila is certainly here to fix that. Instead of making an entirely new game, the studio thought it would be a better idea to overhaul the old Altitude0 and turn it into a new game.
9 photos

Since we haven’t played the original, we don’t know yet how much different Wing Breakers is compared to Altitude0, but chances are not many have played the latter. Yet, according to folks at Gugila, they decided to change and improve the game a lot during the game's development and listened to suggestions from players.

Since the game's scope became a lot bigger than they originally planned, they had to rebuild the game completely. Wing Breakers combat air racer with a twist. It comes with many different game modes, including a large solo campaign, Grand Prix competitions, and time trials.

More importantly, Wing Breakers features both online and local multiplayer so that you can play with friends online or in split-screen mode. Additionally, the game lets you play team-based matches if you’re into competitive air fights.

All the planes included in the game can be upgraded with performance parts, skins, and decorations (i.e., stickers, toys, colored smoke trails) to make them unique.

But the most important thing about Wing Breakers is that the game doesn’t take itself too seriously, so don’t go in expecting a flight simulator. While flying your plane, you will have to watch out for weird obstacles like swinging blades, fire rings, and even … animals that will jump on your plane.

Despite the fact that Altitude0 has now been replaced with Wing Breakers, the game is still a work in progress, but if you like what you see in the trailer below, you can pick it up via Steam for less than $20. 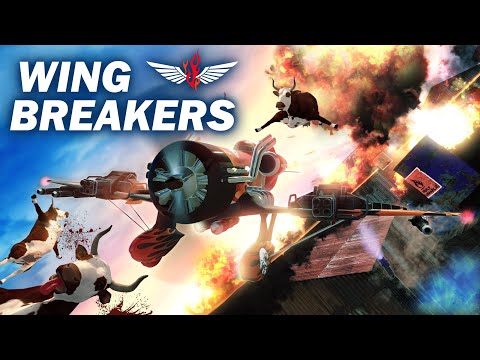